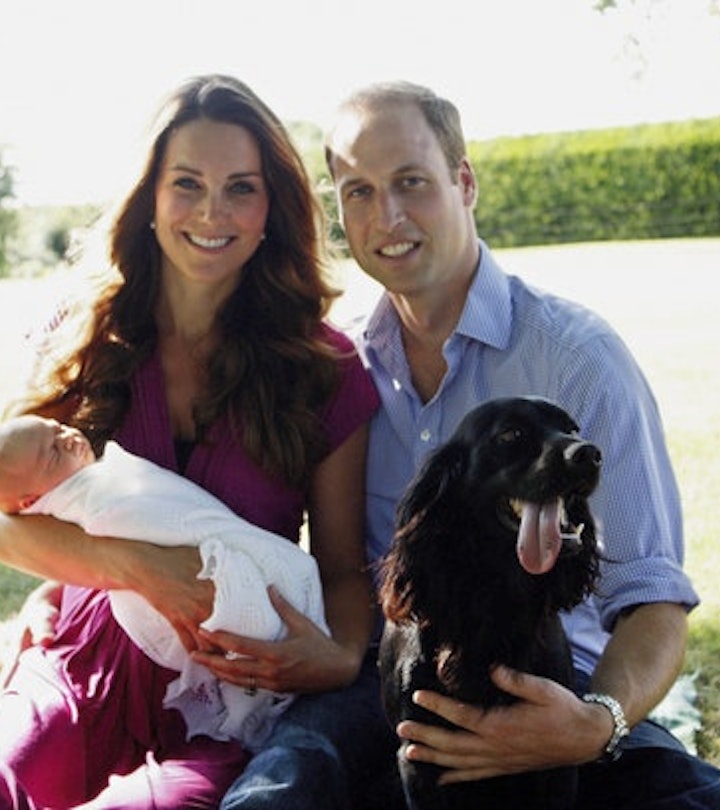 The Duke and Duchess of Cambridge announced their family dog passed away. "We will miss him so much."

After having him in their lives for nine years, Kensington Palace announced on Instagram that Prince William and Kate Middleton’s beloved dog, Lupo, has died. “Very sadly last weekend our dear dog, Lupo, passed away,” the Duke and Duchess of Sussex on Instagram. “He has been at the heart of our family for the past nine years and we will miss him so much.”

Lupo was first seen as a tiny pup spotted walking along the beach with William and Middleton back in 2012, according to Vanity Fair. At the time, the palace wouldn’t give the English Cocker Spaniel’s name, calling it a "private matter," but word leaked soon enough that they were calling him Lupo. And the royal pup had been a fixture in their lives ever since, showing up in photos with the kids and on walks with Middleton.

He was a beloved member of the royal family for so long, and here are a few facts about the former royal companion/guard/receiver of royal belly rubs to brighten your day.

Lupo's Mom Was Also A Member Of The Family

Lupo’s mom, a dog named Ella, belonged to Kate Middleton’s parents, according to The Frisky. No word is out on who the father is, but it’s fun to think of the mother-son reunions the Middletons could have had with the dogs.

The Pup Was Meant To Be a Companion

In 2018, Prince William and Middleton held a Christmas party at Kensington Palace for military families who were separated from their military member during the holidays. At the party, according to Hello! Magazine, Middleton let word out that a military separation was the reason they adopted Lupo. A party attendee told People that she heard a story William told some friends about his deployment to the Falkland Islands: "He was saying how difficult it was for Kate because he was leaving for six weeks. It was when they’d just got the Spaniel to help her with the time apart. She appreciates what wives and families go through."

The Name Lupo Has A Special Meaning

It took a while for Lupo’s name to be revealed to the public and when it finally was, it was under the best of circumstances. The Duchess of Cambridge was attending an event at a primary school and chose to reveal the name to a boy who handed her a stuffed toy dog, according to The Telegraph, saying: "Why don’t we call it after my dog? He’s called Lupo."

The name means “wolf” in Italian and has a close connection to Middleton. The surname of her paternal great-grandmother was Lupton, according to Vanity Fair.

Lupo Had A Close Connection To Prince George

When it came time to pick a name for the royal baby they were expecting in 2013, the royals played a little game with Lupo, according to The Mirror. The Duke and Duchess of Cambridge reportedly laid down pieces of paper with names on them and let the pooch pick the name. "But the names have been so varied that the child could end quite mixed up — and be called Victoria Alexandra George David Beckham," a source joked to the publication. Luckily, Lupo chose well, and we know the young royal as Prince George.

Lupo Is A Character In A Children's Book Series

The pup is the central character in a series of children’s books called The Adventures of Lupo, by Aby King, USA Today reported. Titles include The Secret of Windsor Castle, The Curse at Buckingham Palace, and The Thief at the Tower of London. The bad guys in the series? The Queen’s corgis, according to USA Today. Dun dun dun!

Lupo Got The Royal Treatment

As would be expected for a royal pet, Lupo was well-cared for during his nine years of life, with a special diet and regular visits to the vet. But he also got perks of the posh life, too, according to The Frisky. The bed where he slept was reportedly made of the best materials and fabrics. No scratchy average dog bed for this little guy!

All this just goes to show that Lupo was one lucky dog, indeed. Well cared-for and, most importantly, well-loved. While he might not have known how lofty his owners were, he surely knew how much they loved him throughout his lifetime.

This article was originally published on Aug. 30, 2019