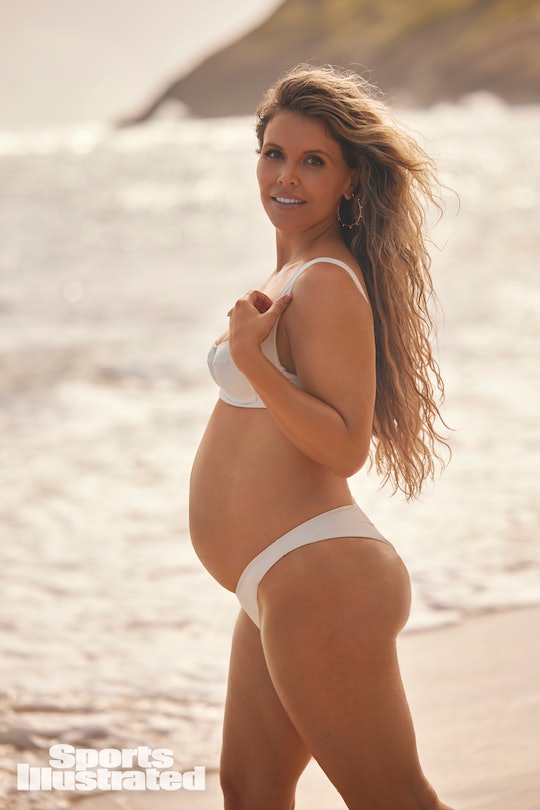 She’s certain she won’t be the last one we see.

For 58 years, the Sports Illustrated Swimsuit Issue has been an iconic tradition. For most of its history, the issue has long been associated with a particular brand of female beauty paired with a signature, glamorous style of photography. In recent years, however, that beauty has become more expansive — curvier models, older models, more muscular models, more racially diverse models — and now, Katrina Scott has become the first (visibly) pregnant woman in the 2022 Sports Illustrated Swimsuit issue.

“Sports Illustrated really celebrates women as they are, and really break boundaries through beauty standards in media; they're the first to do a lot of things,” she tells Romper. “I think it'll be the first of many more pregnant models.”

To hear Scott tell it, being on set for a Sports Illustrated Swimsuit Issue shoot is kind of like being in the bathroom of a club at 1 a.m. where everyone’s enthusiastically pumping one another up. “It's a team of women,” she says simply, “and they just want you to feel comfortable, confident, and amazing in your own body as you are. Anyone could shoot for Sports Illustrated Swimsuit and literally feel like the most beautiful version of themselves.”

Scott made her Sports Illustrated debut in 2021 when she was named Rookie of the Year. She is the creator of Live Beautifully, co-founder of Tone It Up, and an ambassador for Baby Quest Foundation, a nonprofit to provide support and grants for those struggling with fertility. For Scott, it’s a personal mission. After the birth of her first child, Isabelle, in 2018, Scott and her husband Brian struggled with secondary infertility (which accounts for half of all infertility cases), including three miscarriages. The experience, she says, has left her wary of getting too excited, too confident, or even documenting her pregnancy.

“I didn't even realize that I was doing that until I realized I had no pictures of my bump for the first four months,” she says. “Going to St. Croix with Sports Illustrated was the first time that we really captured the fact that I was pregnant. And it became more real when I was there.”

And it’s going to get even more real very soon. When Scott spoke to Romper, her mother had just flown in to help her prepare for the baby (due at the end of May). Her daughter Bella was “preparing” by arranging a blanket and toys in her baby sister’s basinet. Scott herself is focusing on finding and honoring a new rhythm, for her family and her body, remaining mindful not to stress about “bouncing back” so much as “bouncing forward.”

“For years, we've been told to almost pretend that our bodies aren't changing, and then to celebrate a woman looking no longer pregnant and saying, ‘What baby? You don't even look like you were pregnant,’” she reflects. “Why is there such a standard to look how you did before you became Superwoman?”

“I just appreciate my body so much, that I can create life, because I know how much of a miracle that is, especially after experiencing loss,” she says, “that it really is a beautiful thing.”

The 2022 Sports Illustrated Swimsuit Issue will be available at newsstands May 19.

More Like This
Ireland Baldwin Shares Her Abortion Story In An Emotional TikTok
Chris Pratt Says He "Cried" About That "Healthy Daughter" Instagram Post Controversy
Meghan Markle Calls On Men "To Be Vocal" In The Aftermath Of Roe v. Wade Ending
Ben Affleck’s 10-Year-Old Son Samuel Test Drove A Lamborghini Right Into A BMW