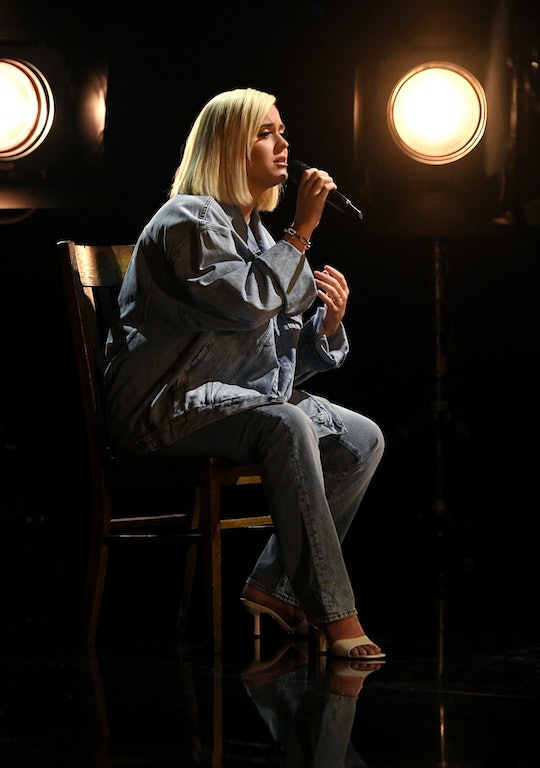 And dedicated it to a very special person in her life.

During the American Music Awards on Sunday night, Katy Perry marked her first performance since giving birth to her daughter, Daisy Dove, with fiancé Orlando Bloom earlier this year. It was an emotional and beautiful performance, which she dedicated to her father.

The 36-year-old new mom wore an all-denim outfit as she performed a stripped down version of her song, "Only Love" from her newest album, Smile, alongside Darius Rucker. "If I had one day left to live and the stars went out on me, the truth is," Perry sang. "Yeah there's so much I'd say and do if I had nothing to lose, nah, nothing to lose."

The emotional song details what Perry would do with her last day on Earth. She sings that she would apologize to her mother for never calling her back and pour her "heart and soul" into a letter and send it to her dad. On Instagram, Perry revealed that she dedicated the performance to her dad, Keith Hudson, using a throwback photo from her when was a baby.

Making her performance even more of a tear-jerker, Perry also sang about the legacy that she will leave for her daughter. "Let me leave this world with the hate behind me, and take the love instead," Perry sang.

Over the past three months since giving birth in August, Perry has been busy. Beyond raising her newborn daughter, Perry has also returned to her job judging American Idol and encouraging her followers to vote in the presidential election. She has also used her platform to tackle misconceptions of maternity leave. In a series of tweets from September, Perry wrote that being a mom is a full-time job and stressed that maternity leave is not a vacation. "When a mom finally goes back to work (whatever profession they do) it's not like they've been coming from months of 'time off...' she's coming from a full time job...of being a mom, lol."

It's clear that Perry has been loving this life as a new mom, American Idol judge, and the pop star we all know and love. "I love my job," she tweeted. The singer also told Entertainment Tonight in October that she has been "grateful" to return to work, thanks to Bloom stepping in. "I mean, my life just feels very full and whole," she said. "And you know, it's hard a little bit these first couple of days away and not being able to be there."