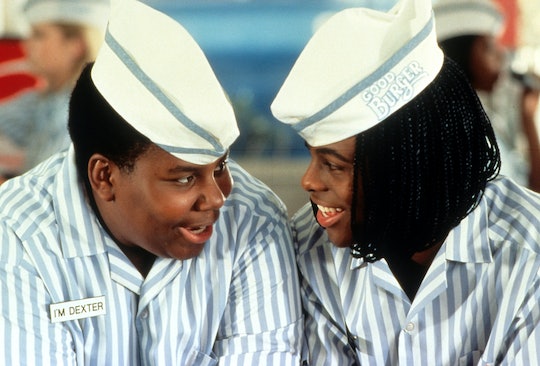 The Good Burger stars were reunited.

One of the most iconic duos from the ‘90s reunited at the 2022 Emmy Awards tonight to the delight of every Nickelodeon kid: Kenan Thompson and Kel Mitchell! Thompson hilariously hosted the event, where he was joined by his All That co-star for a special Kenan & Kel throwback. Yes, there was a Good Burger reference made, and it was amazing!

“Well, you’re the bartender,” he responds.

After some more playful banter, Thompson walks up to a man who had previously been covering his face on the bar. “Excuse me, sir, can we get you a drink or something?” he asked.

Mitchell pops up his head and says, “Uh, you know what, can I get a Good Burger?” making Thompson scream, “Oh my god!” and the whole audience cheer.

Then the duo give each other a huge hug and Thompson quips, “Make it two Good Burgers.” Then the two do some Kung-Fu moves as the show moves to the next scene.

All Nickelodeon kids were screaming at this iconic reunion. Kenan and Kel both starred in All That in the late ‘90s, which later earned them their own sketch comedy show, Kenan & Kel, which ran from 1996 to 2000. Their most famous sketch happened at the fictional restaurant, Good Burger, which you may remember from the 1997 movie, Good Burger. In the famous bit, Mitchell stars as Ed, the cashier who always said, “Welcome to Good Burger, home of the Good Burger, can I take your order?”

From his “Hey Dude” song (even the Jonas Brothers are fans!) to Mitchell’s propensity to take everything way too literally, Good Burger is our favorite restaurant that we’ve never actually eaten at.

Fans were bringing nostalgia to the comments. One person wrote, “Who loves this photo? *I* love this photo. Is it true? Mmm-hmmm, I do, I do, I etc etc you get it .”

Can someone get these legends a Good Burger — and maybe a nice, refreshing bottle of orange soda to go with that, please?

More Like This
Emmy Winner Michael Keaton Thanks His Parents For Supporting His Acting Dreams As A Kid
Ben Stiller Hit The Emmys Red Carpet With His Daughter Ella
Mindy Kaling & B.J. Novak Joke About "Complicated Relationships" At The Emmys
Sheryl Lee Ralph’s Speech Was The Most Inspiring Moment Of The Emmys