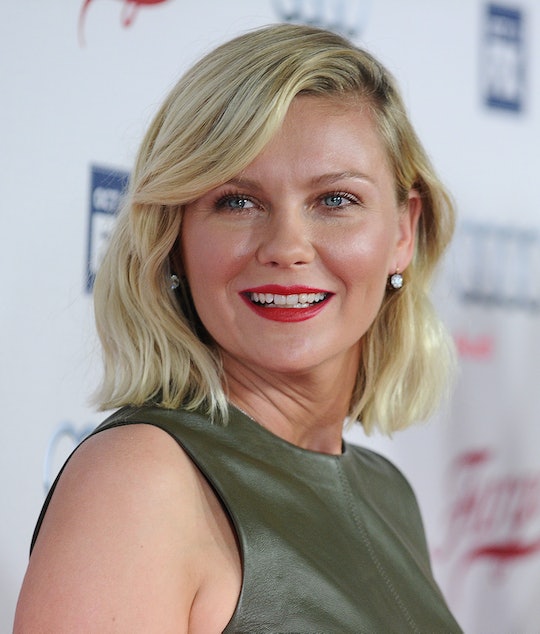 Kirsten Dunst's Nursery Is So Cozy, Her Son Calls It His “Living Room”

While Kirsten Dunst tends to keep details about her private light out of the spotlight, the actress did share a rare look inside her home gorgeous home with her partner, Jungle Cruise actor Jesse Plemons. In a video tour of her home for Architectural Digest, Dunst even shared a peek at her son’s nursery that he adorable refers to as his “living room.”

Dunst welcomed her second child, a son named James Robert, earlier this year. And when it comes to raising James alongside their 3-year-old son and his big brother, Ennis, the couple is doing it a “charming ranch house” in the San Fernando Valley in Southern California.

The classic Hollywood home has a pool, and rooms filled with “old things” that make Dunst “feel things,” she told Architectural Digest in a video tour of her home. Although their home is filled with dark, yet warm colors and comforting pieces, the nursery is one of the coziest rooms in the house.

The nursery has dark green wallpaper, created by Lake August, with printed foxes and mice on it. “I can tell him always that his foxes are, whenever he’s like ‘I’m scared’ — well, he’s not really scared, he just wants to sleep in my bed — that his foxes protect him,” she explained.

The nursery also has a green leather couch, contributed by Plemons, that turns the room into “an epicenter” for the very “social” family, where they can sit there, read books, and hang out with their sons. Even her oldest has taken note of how welcoming it is. “Ennis calls it his living room, he doesn’t even call it his bedroom,” she explained. “He’s like ‘You wanna come to my living room?’”

The boys can also find comfort in the outdoor areas of the home, which are segmented into little corridors that they can explore. “When I grew up in the valley, I had a yard that had a little overgrown path in the back,” she explained. “So it was really important to me that it had nooks where it felt like were not at all manicured, where you could be a kid, and walk around the backyard, and feel like you’re getting lost, or Tom Sawyer, or whatever. That was very important to me to have that kind of feeling for my kids because L.A. is a city.”

Although Ennis may prefer to sleep in his mom’s bed from time to time, his bedroom or “living room” is so cozy that it looks like the perfect place to take a nap.