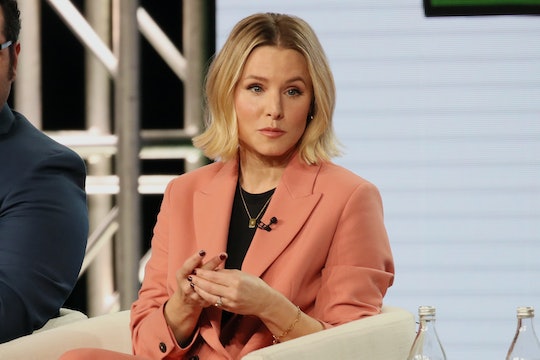 The Good Place star is teaching her daughters to navigate their own bouts of big feelings.

Kristen Bell is no stranger to feelings of depression and anxiety. The Good Place actor first opened up about her mental health in 2016, revealing in an op-ed for Time that she experienced her first bout of depression while in college. Now, the mom of two is sharing what she’s learned about dealing with mental health issues with her daughters, 6-year-old Delta and 8-year-old Lincoln. In an interview with CNBC, Bell revealed she’s helping her kids learn how to handle big emotions by asking them one simple question.

“Sometimes, with a mental health issues, you just got to let [your feelings] live,” Bell told CNBC. But acknowledging the existence of a feeling doesn’t mean you need to allow yourself to become defined by that feeling, Bell said, adding it was important to recognize that tough feelings aren’t “your feelings” but “a feeling that is passing through you.”

To help her daughters navigate their own bouts of tough or big emotions — a tactic known as emotional self-regulation — Bell told CNBC she often asks them one simple question whenever they start to cry: “Do you want a solution to this problem you’re crying about, or do you just want to let this feeling pass through you?”

The Child Mind Institute defines self-regulation as the ability to manage one’s emotions and behaviors, including resisting highly emotional reactions despite upsetting events or stimuli, handling feelings of frustration without outbursts, or calming one’s self down. But emotional self-regulation isn’t something most children are born knowing how to do. Instead, it’s a skill parents often have to help children learn and practice.

Questions like the one Bell chooses to ask can help children become more self-reflective, which The Child Mind Institute has said ultimately helps them self-regulate their emotions. “When kids are part of an environment that’s reflective and analytic as opposed to emotional and fast-paced, they can learn to make better choices,” executive director of Winston Prep schools Scott Bezsylko said in a Child Mind Institute article on self-regulation. “We need to slow down and model self-reflection and self-awareness and self-regulation for our kids.”

But Bell’s question about letting a feeling pass through isn’t the only thing she’s teaching her children to regulate their emotions and behaviors. The Good Place actor also told CNBC she makes it a habit to call a time-out whenever things start to get overwhelmingly stressful. As she explained, “I will go to my bedroom for 10 minutes, just to reset and regulate.”

More Like This
Adele’s Grammy-Nominated Album Features A Beautiful Song Written For Her Son Angelo
Brandi Carlile Is “Finally Cool” To Her Two Adorable Daughters
Sally Field Is The Ultimate Cool Mom Who Once Tried To Set Her Son Up With An Olympian
Marie Kondo Gives Up Tidying Post-Kids, Sparking Joy For Moms Everywhere
What Parents Are Talking About — Delivered Straight To Your Inbox