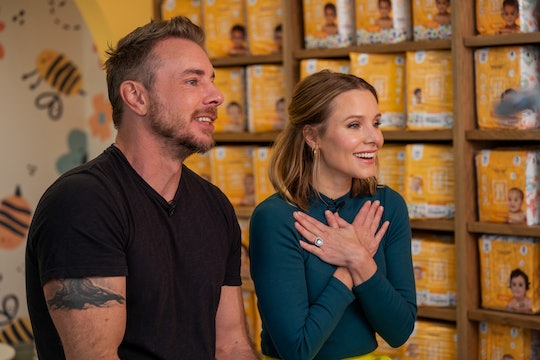 The co-founders of Hello Bello talk diapers, parenting, and how supply chain issues are affecting them.

I’m ostensibly with Kristin Bell and Dax Shepard to discuss diapers — specifically those produced by Hello Bello, the company they co-founded with a few friends — but the conversation turns quickly to the quest to leave diapers behind. Do Bell and Shepard have any tips for potty training?

With their daughters, Lincoln, 8, and Delta, 6, “we had both ends of the potty training spectrum and we didn't do a single thing differently,” she says. They might have claimed expertise when their eldest was a toddler. “I took her to pick out a potty, which was my mother's suggestion,” Shepard says. “We said, 'Hey, that's your potty if you ever want to use it.' She was in her high chair and she said 'potty.' We took her over there and she took her diaper off. We thought we were geniuses.”

She is an “unbelievably responsible” kid, adds Bell.

Their youngest didn’t follow the same path. “We did the same thing, but she did not want to get out of the diaper,” says Bell. “So it just depends on the kid."

I was chatting with Bell and Shepard on a 90-degree fall day in Waco, Texas, where I had traveled with a small group of reporters to witness the grand opening of Hello Bello’s first factory. When I told people I was headed to Waco, they eagerly asked me if I was going to meet Chip and Joanna Gaines. (I was not.) It is a testament to Bell and Shepard’s popularity as a couple that disappointment over the fact that I wouldn’t have a story about Chip and Joanna was immediately replaced by urgent questions about what Kristen and Dax are really like.

Here’s what I can tell you: Bell and Shepard are a good team. They banter without stepping on each other, expertly punctuating each sales pitch with a joke. They can push the boundaries just enough — joking about the self-care value of vodka and vibrators, which was charming I promise — without ever letting you forget they are parents first, everything else second.

They appeared to genuinely enjoy talking about their four-year-old company and its goal of bringing “premium” baby products to consumers at affordable prices. The company’s diapers come in an array of adorable patterns which are updated seasonally, and they’ve expanded to wipes, lotions, bath products, sunscreen, supplements, and cleaning supplies, with a distinct emphasis on sustainability and non-toxic ingredients.

The Waco factory also contains the first Hello Bello retail shop (the space is designed by Chip and Joanna Gaines’s Magnolia team, so I did get a tiny bit of Gaines payoff) and arrayed on shelves together, the packaging is poppy and engaging without being too busy. “We always said the creativity should be the leader and also sort of messiness and the slight amount of chaos, but fun within the chaos,” says Bell.

Shepard says his design mandate was the kind of packaging you’d find at a cool West Village baby boutique, and Hello Bello has nailed the combination of sleek and twee that most parents I know find irresistible.

Hello Bello is now the leading subscription diaper bundle service in the country and is prominently on the shelves at Walmarts everywhere. Bell can rattle off the stats: “Hello Bello started with 10 products but now we’re up to hundreds of SKUs, we’re in 27,000 stores in seven different countries. We opening in the UK in the beginning of January.” Shepard’s her hype man. “You’re doing an incredible job,” he interjects.

The outside of Hello Bello’s massive new facility is brightly painted with their signature graphics and outfitted with custom-built Italian machinery that can roll off 800 diapers a minute. Not many outsiders to the manufacturing process get a chance to see such a massive enterprise in action, and when they fired up the machines, those of us who make a living typing away in our bedrooms all watched spellbound.

Going into this, I said ‘I have a job and I'm already overpaid and I don't need another paycheck. So I'm here to have a seat at the table and throw my weight around and make sure we’re on the up and up.’

Bell and Shepard know they are the draw for media coverage, but Hello Bello is transitioning to domestic manufacturing at their own plant at a moment when people who don’t usually care about trans-pacific shipping routes and container availability are suddenly deeply interested in supply chain issues.

“This factory allows us to become a little more independent from all these pretty complicated systems,” says Shepard.

It’s also a moment when there is a much broader awareness of the challenges that working parents have in paying for necessities like diapers. Bell says making diapers more affordable — and finding ways to get bundles to families who can’t afford them at all — has always been part of their mission. “This has been important to me from the very beginning,” she says. “Going into this, I was very blunt with our partners that I have a job and I'm already overpaid and I don't need another paycheck. So I'm here to have a seat at the table and throw my weight around and make sure we’re on the up and up.”

“We saw a 70% increase in families who are struggling with diapers in 2021 alone,” she notes.

To support those families, Hello Bello has launched a Diaper Doody Fund on their site, something like a GoFundMe for diapers where families and organizations can solicit donations. A family needs to raise about $800 for one year's worth of diapers; shipping is about $2 to $6 per order.

Bell is also giving away a year's worth of diapers every Tuesday through the Hello Bello Instagram, and that she lets the winning family designate a second family to get a year’s supply as well.

And does all this diaper talk make them nostalgic for that era of their lives?