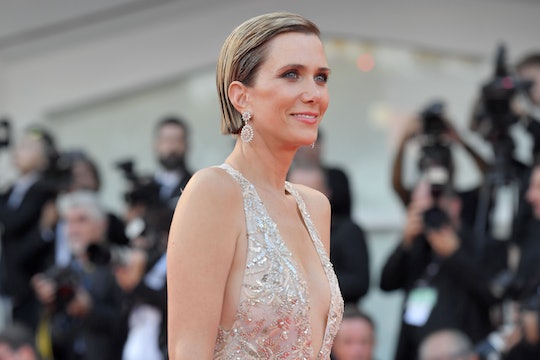 The actress and her husband Avi Rothman welcomed twins via a surrogate last year.

Months after welcoming two children, Kristen Wiig has quietly revealed her twins' names. The actress, who has previously spoken out about her years-long struggle with in vitro fertilization, or IVF, announced in June that she and husband Avi Rothman had used a surrogate to add to their family.

Although most celebrities often reveal their children's names over social media or in exclusive interviews, Wiig and Rothman took a more subtle approach. The 47-year-old actress reportedly dropped her twins' names — Luna and Shiloh — in a "special thanks" section tacked on to the ending credits of her latest film, Barb and Star go to Vista Del Mar. Along with thanking her newborn twins, Wiig also thanked Rothman in the section, according to Entertainment Tonight.

Although unconventional, the subtle, blink-and-you-missed-it name reveal is perhaps the perfect way for Wiig to reveal her twin's name as the Bridesmaids star announced she had become a mom in a similarly subtle way last year. In May, Wiig virtually hosted a special "Mother's Day At Home" episode of Saturday Night Live, during which she hinted at having had children.

"I don't know if I truly appreciated my mom the first 45 years of my life," Wiig said in her opening monologue. "But this year I'm feeling especially grateful for her advice, her love. I'm so thankful for all the things she's taught me, like preparing to be a mom myself." One month after Wiig's monologue, tabloids including Us Weekly were among the first to confirm that Wiig and Rothman had welcomed twins via a surrogate sometime in the months previous.

In August, Wiig told InStyle her twins were then-9 months old, placing their birthdates around December or early January. "We've sort of been quarantining since January because of the babies," Wiig told the magazine. "We're nesting, and we're tired. Having two 9-month-olds is a lot!"

Despite the workload newborn twins may bring, Wiig said she was excited to have children. "They're growing, and I can't wait to see them every morning," she told InStyle.

The actress later revealed to InStyle that she and Rothman had spent three years "in an IVF haze" before turning to a surrogate, describing how she would pop into airplane and restaurant bathrooms to give herself hormone shots. "Emotionally, spiritually, and medically, it was probably the most difficult time in my life," Wiig told the magazine. "I wasn’t myself. There are so many emotions that go with it — you’re always waiting by the phone and getting test results, and it was just bad news after bad news. Occasionally there would be a good month, but then it was just more bad news. There was a lot of stress and heartache."

In the end, however, Wiig said she doesn't have any regrets about her journey to motherhood. "Overall it was a very beautiful thing, and now that I'm on the other side, I wouldn't have had it any other way," she said. "I’ve always believed that things happen the way they’re supposed to happen, and this is how [our babies] were supposed to get here."

Most recently, Wiig told radio host Howard Stern that she felt "very lucky" to have her twins, noting they had "changed her life."

More Like This
Serena Williams Shares How Her Daughter Comforted Her After Losing A Big Match
Exclusive: Watch Hayden Panettiere Talk About Addiction Treatment 4 Months Postpartum
Gabrielle Union Admits She May Be Becoming A Bit Of A Dance Mom With 3-Year-Old Kaavia
10 Parenting Lessons From Abbott Elementary That You'll Want To Write Down