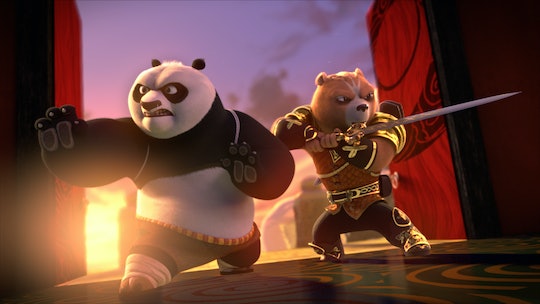 Kung Fu Panda is back! The beloved panda bear named Po, who loves martial arts and delicious food, is going on a new adventure with an English knight called Wandering Blade in a new TV series coming to Netflix. Romper has an exclusive sneak peek at Kung Fu Panda: The Dragon Knight, which premieres on July 14, and your kids are going to love it!

Jack Black returns as the voice of Po, James Hong returns as Mr. Ping, and Rita Ora stars as Wandering Blade in Kung Fu Panda: The Dragon Knight. According to the series’ official logline, “During a well-deserved eating tour of China, everyone’s favorite Kung Fu Panda is wrongfully accused of misusing a magical weapon. To clear his name, Po teams up with an exceedingly proper and impatient English knight on an epic quest."

Expect adventure, hilarious one-liners, and an over-arching theme of learning to work together and embrace diversity in this new series. Po will leave China for the first time, learning about new people, places, and cultures, while Wandering Blade learns how to embrace the lighter things in life.

“So stoked to be a part of Kung Fu Panda,” Black said in a statement. “It really has endured as a universal cultural touchstone and a whole new generation of kids are watching the Dragon Warrior wave!”

“I’m so excited to be a part of the Kung Fu Panda series coming to Netflix!” said Ora in a statement. “As a child I was always fascinated by animation and how these characters were brought to life, now being able to voice a character has really made this a full circle moment for me. Joining Jack Black and the rest of the cast on this adventure has been an absolute blast and I can’t wait for fans to see it.”

Fans were first introduced to Kung Fu Panda in the 2008 Kung Fu Panda, which was nominated for an Academy Award and became DreamWorks’ highest-grossing original animated film. It sparked a $1.8 billion-trilogy starring Jack Black as Po, James Hong as Mr. Ping, Angelina Jolie as Tigress, Jackie Chan as Monkey, Seth Rogen as Mantis, Dustin Hoffman as Shifu, and Bryan Cranston as Li among others.

The franchise expanded into video games, global theme-park attractions, and two other TV series, including the Emmy Award-winning Kung Fu Panda: Legends of Awesomeness, which featured Mick Wingert as Po. Hong has voiced Mr. Ping in all the movies and TV series, but this is the first TV spinoff Black will star in.

All 11 episodes of Kung Fu Panda: The Dragon Knight Season 1 will be available on Netflix on July 14.

More Like This
Exclusive: CoComelon Is Going On A Live Tour Across the U.S.
Netflix Has Lots For Families To Look Forward To This August
A Guide To Every Dog Breed In 'Bluey'
The White Lotus Is The Perfect Thrilling Treat For After The Kids Go To Bed