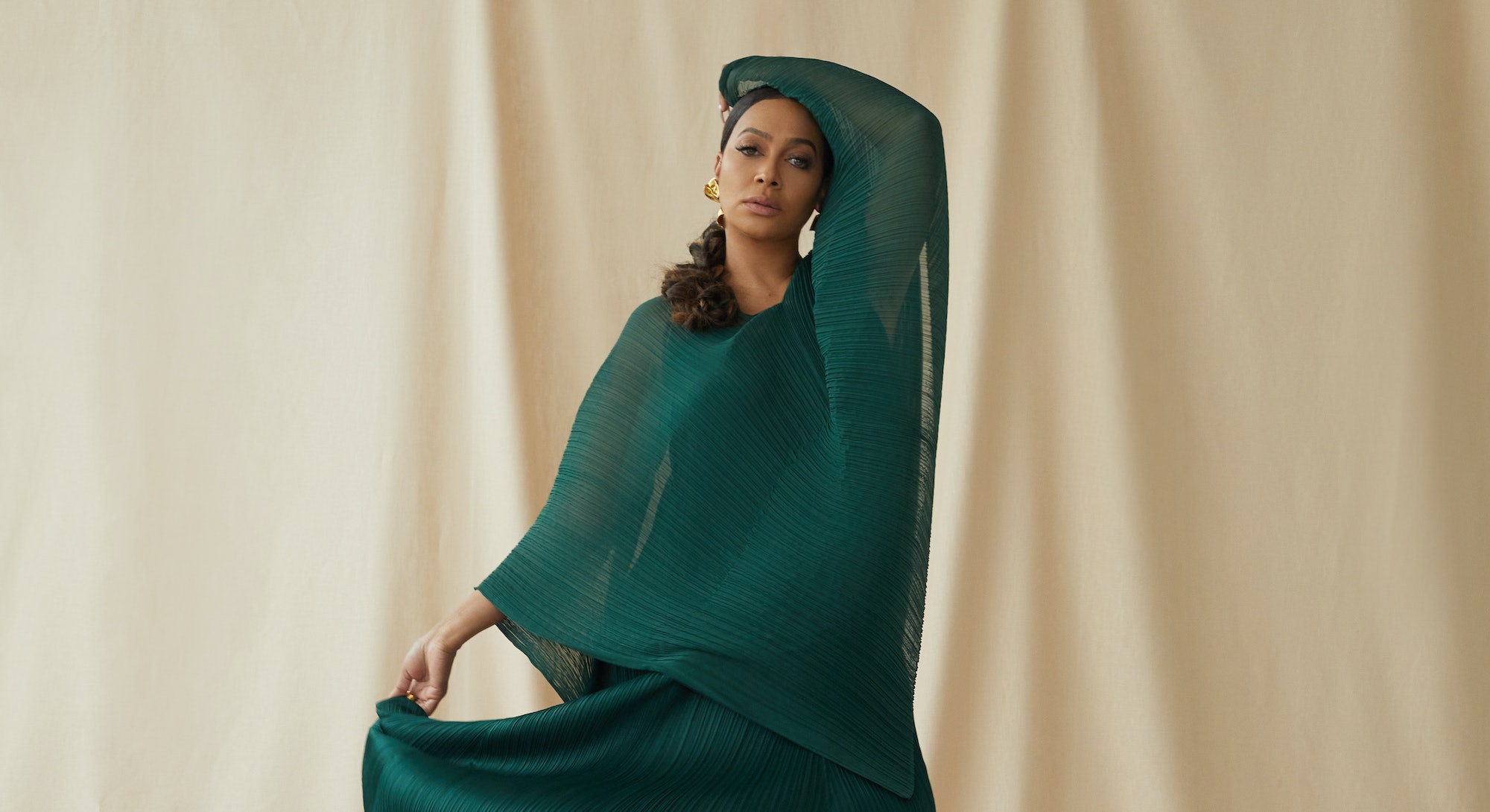 The actor and producer raises awareness and keeps joy alive.

It’s fitting that La La Anthony is in motion when she hops on the phone with me in late October. She’s The New York Times bestselling author of The Love Playbook and mom to a 13-year-old son, Kiyan (with Carmelo Anthony), and is in high demand in Hollywood, in spite of pandemic slowdowns. She’s currently starring on Showtime’s The Chi, and is working on an upcoming series inspired by Cyntoia Brown Long’s devastating story. When we speak, she’s only just touched ground in her native New York after an extended stint traveling, which included longtime friend Kim Kardashian’s birthday getaway (yes, the one on the island).

With my own anxiety about flying in the age of the coronavirus in mind, I ask Anthony, 39, about her experience with the new safety protocols for passengers, which include temperature checks for many airlines. “It's been OK,” she says assuredly. “As long as you use your precautions, the airports and airplanes are extremely safe.”

Anthony speaks matter-of-factly, with the even temperament of a woman accustomed to switching from school Zoom to back-to-back work Zoom meetings. This is not the larger-than-life MTV VJ seen in the early 2000s or the glamorous housewife of La La’s Full Court Wedding and La La’s Full Court Life.

“Now, I think that certain things should be kept private,” Anthony says. “I'm more focused on my acting and producing as opposed to exposing my whole personal life to the world.” Though she’s careful about discussing intimate details about her relationship with her son, she’s unabashed about what motherhood has meant to her. “Kiyan brings me happiness,” she says. “Being a mom is my happy place.”

She talks about motherhood with the same confidence that has carried her to this triumphant point, as well as through things others might find difficult — like the fact that she and Carmelo were cohabitating amid the pandemic for the sake of Kiyan. “I always want my son to be able to say, ‘No matter what, my parents loved each other,’” she explained to Essence. “‘My parents loved me.’”

Anthony describes her own childhood in Brooklyn as one defined by love from her mother, aunts, uncles, and cousins. “I'm such a family person,” she says. “I come from a big family [and] we are all very close.” But it is her mother, Carmen Surillo, who helped Anthony, born Alani Nicole Vázquez, catapult herself from a driven Afro-Puerto Rican teenager who was offered her own radio show while still in high school to a multi-hyphenate star and influential voice for other women.

Surillo pushed Anthony to be independent and dream big from her earliest days. “[She] let me be who I am, let me be creative, let me be free,” Anthony remembers. “She never came in the way when I would come to her with all my crazy ideas.” Not even when Anthony announced her intention to move to Los Angeles when she had barely reached voting age. “When I was, like 18, I said, ‘Mom, I'm moving to L.A.,’” Anthony continues. “I had never been to Los Angeles before. I was chasing a radio job. My mom [said], ‘Go chase your dreams.’ That little bit of support is what you need to push you to that next stage in life.”

Anthony mirrors that support for her own child, who is already active in the Black Lives Matter movement. Just a few months ago, Kiyan received his mother’s blessing to share the cover of Slam Magazine with his dad, where the two are wearing hoodies in tribute to Trayvon Martin and countless other lives lost to racist violence. The cover line reads, “IT STOPS NOW.”

As difficult as it can be to speak to children about discrimination and police brutality, Anthony keeps a running dialogue with Kiyan, “making sure he's fully aware of what's going on in the world and understanding the stories of Ahmaud Arbery, George Floyd, and Breonna Taylor. I think the way you teach your kids is by making them aware of how these things will affect them and making sure that he's not blind to what's going on in our communities and around him,” she says.

That includes a deeply flawed American voting system, where voter suppression has demoralized millions of Black and brown people. Our conversation took place just a week before Election Day, so both Anthony and I were feeling the enormous energy that had built up around it. She had been encouraging her millions of followers on social media for weeks to get to the polls with videos like “Why I’m Voting.” And though Kiyan has five more years to go until he can vote, Anthony has already begun talking to him about the power of the ballot.

Anthony is adamant about centering joy in Kiyan’s life. “I still try to have him be a kid in the current state of the world,” she says.

“So many people complain about the state of the world or the country, but the easiest thing to do is to vote, to allow your voice to be heard,” Anthony said. “Even at 13, I think [it's] extremely important [to] understand what it took for us to even have the right to vote and [to] never take that for granted.”

In between talking about police violence, voter suppression, and the disproportionate impact of the pandemic on people of color, Anthony is also adamant about centering joy in Kiyan’s life. “I still try to have him be a kid in the current state of the world,” she says. “[He'll] be able to enjoy little things, of course with precautions — whether it's a mask or gloves or whatever. Sometimes as parents we don't check in to make sure they're OK and dealing with all of this OK. I make it a point to always do that.”

Anthony also makes time to center fun in her own life. That includes catching up on Netflix and DIY beauty treatments, as well as turning up “CRAAZZZYY” for Kardashian’s 40th and pulling together a sexy Playboy bunny Halloween costume “at the last minute.” That sense of fun is also thanks to the family that has always been there for her. “I have a great family and Kiyan’s dad is amazing,” she says. “[They help] me balance it all and still be a great mom and have a career. I think it's a pretty tough juggling act for anyone, but I've been blessed to have the support of my family.”

To Anthony, the “juggling act” is a way to show Kiyan what a self-possessed woman is, one who, she says, always pushed harder when people told her she couldn’t do something. “I want to be a great example to my son as a hard-working woman,” she says.

The self-professed “girl’s girl” also wants to help counter some of the more stereotypical images he may see on TV and film with her own female-centric entertainment ventures. “I keep my eyes open for stories where my son can see women, especially Black women, in a really positive light and see the different things we go through.”

Anthony is also intentionally teaching him about consent. Though she has talked to her son about “respecting boundaries and no means no,” she also leads by example. “[I] also teach by showing how I respect myself, what I don't tolerate,” she says.

Of course, remembering one’s own self-worth is easier said than done. Anthony has a sort of mantra, something her dad told her. “‘Love yourself from the inside out,’” she recites. “I always try to remember that and focus on what makes me happy and trying not to feel guilty about that. Because as a mom, everyone knows you put your children and everyone else before you. I'm trying to do better at making sure I'm taking care of myself along the way.”