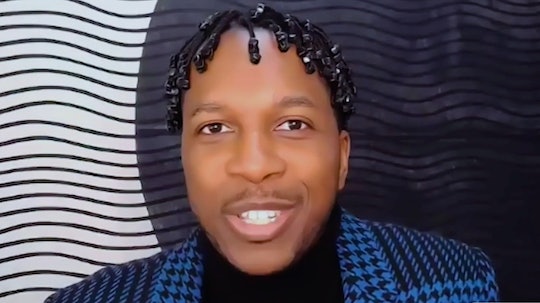 Leslie Odom Jr. Is Preparing For Baby #2 While Attending The Golden Globes

Taking home two Golden Globes may not compare to bringing home a new baby, but it has to feel good. Leslie Odom Jr. is expecting his second child and during his Golden Globes pre-show interview, he shared that he and his wife are "weeks away" from welcoming their littlest addition. In the midst of his excitement over being a dual-nominee, the proud dad took the opportunity to gush about his growing family.

"We're weeks away. We're like, three weeks away," he said during an interview on NBC's pre-show. "We're trying to store up sleep. Is that a scientific thing? Can I get as much sleep now, and then like a bank? Withdraw on it later?" Odom is already dad to his adorable 3½-year-old Lucille "Lucy" Ruby, but he and wife Nicolette Robinson are clearly busy preparing for the new baby boy.

Back in November, Odom told People that Lucy is still coming around to the idea of being a big sister. "She's so protective of Mama. She speaks to Mama's tummy and says, 'Good morning, little baby.' It's great to see," he said at the time. "It's a very useful thing as a parent; when she's not being the most mature version of herself, we remind her that there's a baby coming and she's got to be a big sister ... she's got to show him the way."

But now that some time has passed and the new baby will be here very soon, hopefully Lucy is ready. As for Odom and Robinson, they're focusing on getting in all the sleep they can get.

Odom took home an impressive two Golden Globes for his work on the film One Night in Miami. But the singer and actor is on his way to bringing home something even more exciting — a brand new baby. Congratulations to the family for all of the wonderful things coming their way!