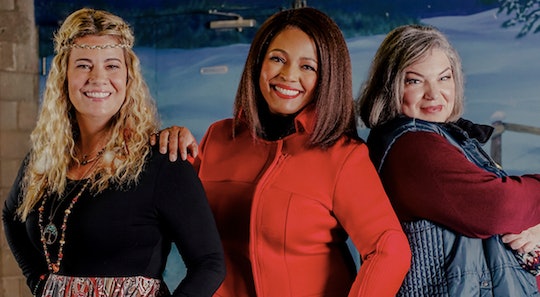 If you're a nostalgic person, then there's a good chance Lifetime's holiday special starring The Facts of Life cast will come as good news. Not only does the special promise to "light up" your Christmas, but it's the first time the gang has reunited in some time.

It was announced Monday the show's main stars — minus one special character — will return for a Christmas movie airing on Lifetime Dec 1. But this project won't revisit the original storyline of girls living and growing up together at boarding school. Nope, this time around the original cast members — Kim Fields (Tootie), Lisa Whelchel (Blair), Mindy Cohn (Natalie), and Nancy McKeon (Jo) — are coming together to tell a new story about Christmas. So although you might be disappointed to leave the Eastland School for Girls behind, the new story sounds just as fun.

Speaking of the new tale, it follows Emma (Fields), who returns to her hometown two weeks before Christmas only to reconnect with an old flame. The two team up to bring Christmas cheer back to her old town, according to Lifetime. It's not clear at this time how the other ladies factor in but I'm sure it will be entertaining no matter what.

"We truly are a family so it was great to work together on something new!” Fields, who is executive producing the new project, said about working with her former costars on the movie, according to People. “It’s been amazing to work together again and have the ladies’ input on their characters from their wardrobe to names, as well as provide fun inside jokes for fans."

If you remember this series from TV Land, you'll notice right away that the current cast is missing someone rather central to the original show: the kind but wise-cracking Mrs. Garrett, who watched over the show's young characters.

Sadly, Charlotte Rae, the actress who so memorably played Mrs. Garrett, passed away in August 2018 at age 92, according to USA Today. Fields intends to honor Rae by naming an ice rink in the movie after her, she told People.

Fields' tribute isn't surprising considering the group remained close after its end in 1988, reuniting multiple times throughout the years. Maybe that's because the whole gang grew up together on TV, as they told Good Morning America in 2011.

I don't know about you guys, but I think it's a great idea to get the gang of such a classic show back together. I've always admired the show as it broke a lot of barriers during its run, as it centered around females and took on important topics, including disability and issues of class.

Not to mention, it was the ultimate escape for many. “We were such a guilty pleasure for many people for so long,” Cohn told TODAY. “It’s kind of nice that we have aged into being cool now.”

That all being said, you can watch You Light Up My Christmas when it debuts on Lifetime Dec. 1!