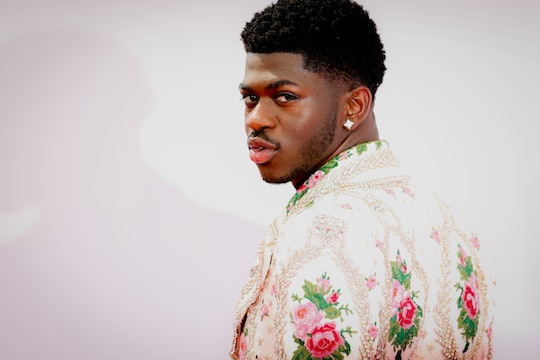 The rapper said he expects to “deliver” his album Montero on Sept. 17.

Lil Nas X is taking a cue from artists like Beyoncé and Katy Perry and announcing his album's upcoming release data with a stunning pregnancy photo shoot. The rapper revealed he was expecting Thursday with a series of pregnancy portraits that showed him cradling a bump while clad in a flowing white robe and wearing a crown of white flowers. But fans won’t have to wait nine months to get their hands on Montero, an album Lil Nas X has called his baby. Instead, the rapper revealed his due date is scheduled for later this month.

“SURPRISE!” the rapper wrote Thursday when sharing three pregnancy portraits and a sonogram on Instagram. “I can’t believe I’m finally announcing this. My little bundle of joy ‘MONTERO’ is due September 17, 2021.”

In an interview with People, Lil Nas X said he’d come up with the idea of announcing his album’s drop date via a pregnancy photo shoot after he heard Megan Thee Stallion’s verse on his song “Dolla Sign Slime” for the first time. “I was like, ‘Oh my God, this is amazing,’” he said. “So I immediately called my stylist. She was like, ‘Wow, this all comes together. Your album. Your baby.’ I was like, ‘Yeah, this is my baby, huh?’ As a joke, she was like, ‘Yeah, you should do a pregnancy shoot.’”

While his stylist may have been joking, Lil Nas X said he actually thought the idea was a good one. “I was like, ‘You know what? That’s actually brilliant,’” he told People. “So now we have this entire thing coming out, and it's going to be amazing.”

Written and produced largely while Lil Nas X and the rest of the world were in lockdown due to the ongoing coronavirus pandemic, Montero reportedly includes a number of deeply personal songs that detail the rapper’s journey and hopes for the future. “You're getting a lot of stories about me,” he told People. “You're getting a lot of stories about my past and where I want to be in my love life. But they're also a bop. I feel like I finally found a great balance between being as real as possible within my music and making a hit song.”

Earlier this week, the rapper also gave fans a peek at the cover of his upcoming album. In it, Lil Nas X floats naked on his back in mid-air over a river that appears to pour into and out of the sky. On Twitter, the rapper noted the album art was designed as a continuous loop “to represent the circle of life.”