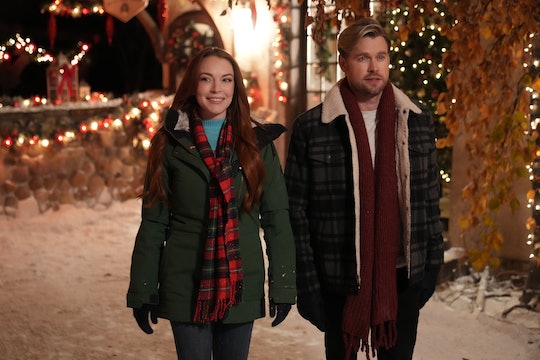 Newly engaged. Undeniably spoiled. Looks amazing in white — check, check, check! It’s official, Lindsay Lohan is giving serious Meredith Blake vibes in her new Christmas romantic comedy, Falling for Christmas, to the delight of ‘90s kids everywhere. The former star of The Parent Trap has a brand-new movie coming to Netflix on Nov. 10 (insert Hallie-and-Annie-level scream here), and it looks so good. Here’s everything we know about this festive film below.

Netflix released more details about the movie on Mean Girls Day, aka Oct. 3, the day Aaron Samuels asked what day it was and Cady Heron responded, “It’s October 3rd.”

“It's October 3rd. now mark your calendars for November 10th. 🎄” Netflix wrote on Instagram, along with a photo of Lohan and co-star Chord Overstreet (Glee). In it, the Confessions of a Teenage Drama Queen star looks gorgeous in a Christmas-red jumper, complete with huge sleeves, a pretty red bow, and her long hair falling in elegant ringlets. Overstreet is dressed in a black plaid shacket with a green scarf, and the two are standing in front of a charming skiing village, lit with Christmas lights. It’s enough to make you crave hot cocoa and want to spontaneously sing Christmas carols, not caring who hears you. (Spooky season, who?!)

Falling for Christmas is set in a ski town.

Just like Elaine Hendrix’s iconic character in The Parent Trap, Lohan plays “a newly engaged, spoiled” woman named Sierra in Falling for Christmas (hopefully she doesn’t have to put an actual lizard up her nose like Meredith did, though!). The Mean Girls star is a hotel heiress in this comedy, who is going skiing at a festive lodge for the holidays. But when Sierra gets into a skiing accident, she suffers total amnesia — which is not ideal for her future hubby.

Lohan’s character then “finds herself in the care of a handsome, blue-collar lodge owner [Overstreet] and his precocious daughter [Olivia Perez] in the days leading to Christmas.” It feels delightfully familiar to a certain vineyard owner and his daughter Hallie. In pictures from the movie, Lohan looks glamorous and beautiful in a white sweater, reminiscent of Meredith’s iconic white dress.

In an interview with Tudum, Lohan described her character Sierra as “Extravagant. Temperamental. Glamorous.” Um, hello? Who else could this describe if not the beautiful young Meredith Blake, who also has a vindictive side.

There will be stunt scenes.

Lohan isn’t a stranger to hilarious stunts (pushing Meredith on an air mattress in the lake comes to mind), but this time she gets to do them herself in Falling for Christmas. “All the stunt scenes were really fun for me because I haven’t gotten to do that much in a lot of my films,” she told Tudum. “When I’m flying off the hill, attempting to ski well and not doing it,” is one of the stunts.

This is actually pretty realistic for Lohan, who added, “I love the idea of skiing, [but] I’m not very good at it.” That makes it so much funnier!

“Christmas is a time when family comes together,” Lohan told Tudum. “It’s just such a loving holiday.”

She also revealed she missed doing comedies. “It’s such a refreshing, heartwarming romantic comedy and I miss doing those kinds of movies,” she said.

This movie, which is directed by Janeen Damian, is Lohan’s first project with Netflix, but it won’t be her last. She will reunite with Damian for Irish Wish, another romantic comedy set in Ireland, when a bridesmaid Lohan wishes to turn into a bride, only to discover that her soulmate might not be the person she thought.

For now, though, she is focused on the Christmas spirit and showing once and for all that not all pampered fiancées with a penchant for the finer things in life are the bad guys — they deserve a happy ending, too. Meredith Blake finally gets justice, and Lohan fans get another deliciously fun movie that is sure to provide endless fodder for quotes in the future.

Mark your calendars — Nov. 10 is going to be amazing!

Stream Falling for Christmas on Netflix Nov. 10, and check back for the official trailer on Oct. 7.