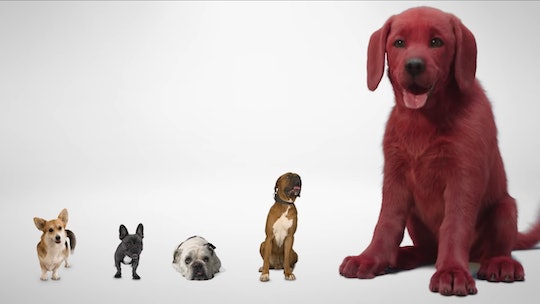 Let's face it, a dog of Clifford's size was made for the big screen.

It's Clifford as you've never seen him before. Paramount Pictures has released the first look at its upcoming live-action Clifford the Big Red Dog movie. Yes, really. Clifford is here, he's red, and, yes, he's huge.

On Wednesday, Paramount dropped a short teaser trailer to Clifford the Big Red Dog, a feature film based on Norman Bridwell's beloved children's book series that is slated to hit theaters sometime in 2021. In the clip, a camera pans across a gang of four adorable dogs as an unseen narrator pays tribute to the furry friends who've gotten us through 2020.

"This holiday season we're thankful for the pets whose love got us through the year," the narrator said before the camera finally makes its way to Clifford. "But next year, get ready to love even bigger."

It's hard to describe what live-action Clifford looks like, but if you can imagine a massive Labrador retriever that's been dusted to be the shade of a pale red velvet cake thanks to CGI, then you're pretty close. Still, seeing is believing so be sure to watch Paramount's teaser trailer below.

Unfortunately, Clifford's new look has yet to find many fans. The Wrap called it a "visual monstrosity" and joked that they "wish the camera pan stopped at the french bulldog." And Collider could only deem Clifford "kinda cute," which for a dog might as well be an insult. On Twitter, one user characterized Clifford's reveal as "terrifying" while others bemoaned his reddish color. "I refuse to recognize a reddish Clifford the Big Red Dog, make him BRIGHT red or get out of my face," one Twitter user wrote Wednesday.

Of course, whatever your opinion of Clifford's new look, Paramount's Clifford the Big Red Dog movie promises big fun for families and children. I mean, this is Clifford after all — everything he does is fun and well, he can't help being big. According to Paramount, the film centers around Emily Elizabeth, a middle-schooler living in New York City who meets a magical animal rescuer played by John Cleese. But Emily Elizabeth never imagined the small, red puppy she adopted from the rescuer would grow and grow and grow into a ten-foot dog. With her single-mom away on business, Emily Elizabeth and Clifford join her fun uncle for an adventure that Paramount promises will have viewers on the edge of their seats.

While the film's release has already been delayed due to the ongoing coronavirus pandemic, and there's no telling what the next few months might hold, Comicbook.com has reported Clifford the Big Red Dog is slated to hit theaters in early November 2021.