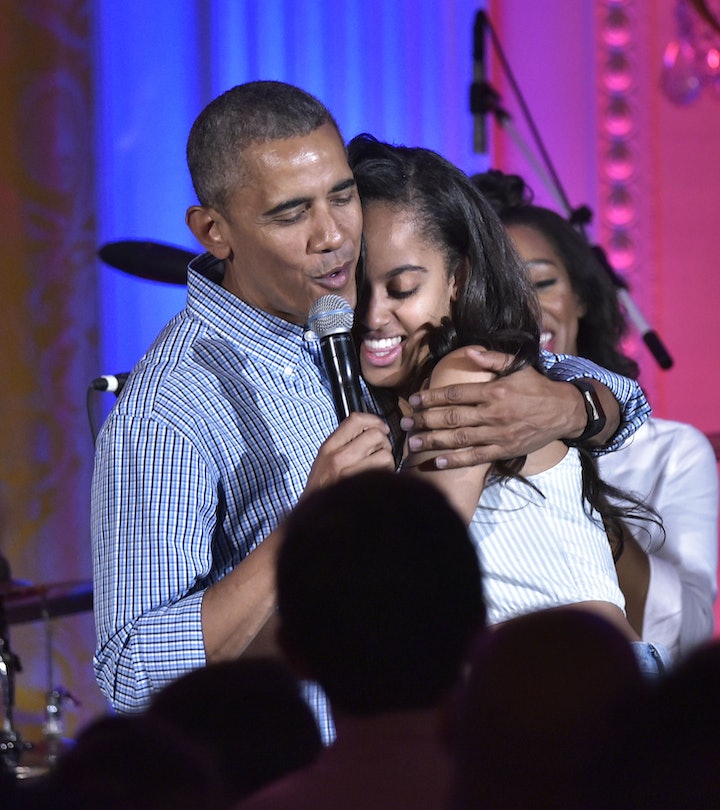 Barack Obama Talks Quarantining With Daughter's Boyfriend: 'I Didn't Want To Like Him'

The young man reportedly had a real impact on the former president's grocery bill.

It seems the Obamas found themselves with an unexpected guest during at least part of their recent quarantine. In an interview on The Bill Simmons Podcast last week, former President Barack Obama revealed Malia's boyfriend was stuck in quarantine with them. Aside from giving the Obamas a bit of extra family time, the experience was a rare opportunity for the father of two daughters to see what's involved in caring for a son — namely, a flexible grocery budget.

"Like, I think, a lot of families, we went through that first month where we were playing games every night and doing little arts and crafts projects and then slowly they started to get a little bored with us," Obama said when asked what his favorite part of being quarantined with his family was. "Maybe teaching Malia and Sasha, and Malia's boyfriend who was with us for a while, spades. And then having some spades games. Teaching them how to properly trash talk and slap the cards down."

Malia has been linked to fellow Harvard student Rory Farquharson since footage of the two kissing at a football game hit papers in 2017. According to Hollywood Life, the pair have since been spotted together in New York City and London, but have never confirmed their relationship to the press.

It seems a visa issue left Farquharson, who is British, quarantining with the Obamas when the novel coronavirus sent much of the country into lockdown earlier this year. "He was sort of stuck because there was a whole visa thing and he had a job set up," Obama said, without directly naming Farquharson. “So we took him in and I didn't want to like him, but he's a good kid."

But it seems there was one thing about Malia's boyfriend that left the former president rather surprised. "The only thing you discover — this is not a surprise to you, Bill, because you've got a son — young men eat," Obama said. "It's weird to watch them consume food. My grocery bill went up about 30%."

Despite the increased food costs, Obama hasn't been shy about how much he's enjoyed getting to spend this bit of extra time with his daughters. In fact, while speaking on The Bill Simmons Podcast, Obama called it a "blessing."

"It's a blessing because all the teenage stuff is kinda gone now," he said of 22-year-old Malia and 19-year-old Sasha. "They're just back and they love you again and they want to spend time with you and they're funny."