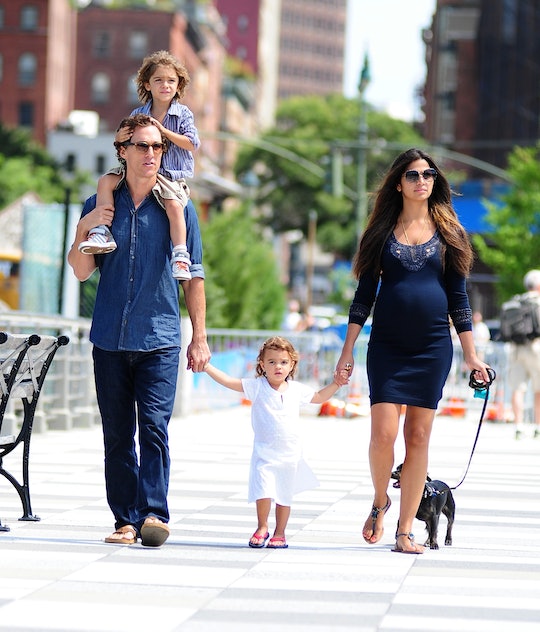 Matthew McConaughey didn’t grow up thinking he’d become a famous actor. That realization came later when he was a few years into college. But as a kid, McConaughey did have some idea of what he wanted his grown-up life to look like. The 51-year-old actor recently told Tim McGraw he knew he wanted to be a dad since he was 8 years old.

“It was when I was 8 years old is when it hit me,” McConaughey told McGraw during an appearance on the country singer’s radio show, Beyond The Influence: Radio with Tim McGraw on Apple Music Country. “I wanted to be a father."

McConaughey, who has three children with his wife Camila Alves, went on to explain that he began to equate fatherhood with success at a young age thanks to his own father and the friends he kept. “I remember what it was — My dad was a 'sirs,' and 'ma'ams' and 'please' and 'thank you' man, and he would introduce me to his friends,” McConaughey explained. "I'm 8 years old looking up to them and shaking their hands saying, 'Nice to meet you, sir.’”

It was then McConaughey said his 8-year-old self realized all of the men he was required to call sir had one thing in common. “The common denominator about all these men that I’m saying ‘sir’ to is that they’re fathers,” he said. “That's why they're a 'sir. I remember in my 8-year-old mind going, 'That's when you've made it. That's when you become a sir. That's what success is.’”

It was a moment that has apparently stayed with McConaughey his entire life. "It hit me then, and it's never left me [that fatherhood is] the paramount example of what being a sir or being the greatest success you can be as a man,” he said.

But McConaughey’s father didn’t just lead him to want to become a dad himself, he also inspired some of the actor’s parenting rules. In an interview with Oprah Winfrey for the Apple TV+ series The Oprah Conversation, McConaughey revealed he employed one of his father’s rules in his own house. “We do demand respect and trust in the household,” he told Winfrey. “One of the rules my dad taught me — no lying — we do not allow lying in the house.”

The actor revealed the other big rule his children were required to follow was to never say the words “I can’t” or use the word “hate.” “Those three words will get you in big trouble in our house,” he said.

Although McConaughey currently has just three kids, he’s previously said he’s open to more, a lot more. While speaking on a HISTORYTalks Leadership and Legacy panel in New York last year, McConaughey revealed he’d love to have 11 kids in total. “I’d like to have eight more kids,” Today reported he said. “[But] my wife’s not on the same page. I understand that. It’s a lot easier for us [guys].”