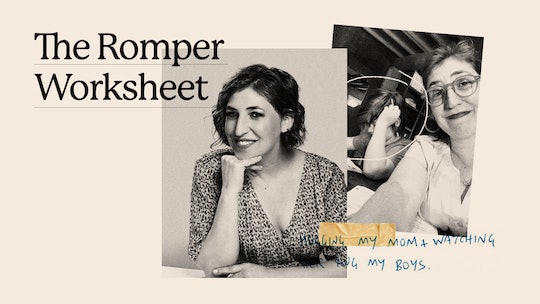 Mayim Bialik Has Done Home Schooling. This Is Much Harder.

Quarantine offers a glimpse into the private lives of the rich and famous, the bookshelves behind their desks and the growth patterns of their gray hair. Or at least this is the premise of Celebrity Show-Off, a charity competition in which celebrities like Diplo and Tori Spelling compete to “produce the most compelling content,” as TBS puts it, from their mansion living rooms, conscripting spouses, children and in-laws into their productions. But while Mayim Bialik is the host of Celebrity Show-Off — and while motherhood is central to her public persona — she shoots her role in a studio in front of a green screen. Her sons, Miles, 14, and Frederick, 11, are at home with their dad, her ex-husband Michael Stone.

“Because we choose to integrate so much in the — quote — regular world, I don't want [my kids] to be recognizable when we go out,” she explains by phone from her home in Los Angeles. Bialik is forthcoming about her parenting experiences, struggles, and principles, and she sometimes envies celebrities who make their children part of their public lives. But she says audiences don’t realize that a full-time security detail often accompanies that choice.

Best known for her roles on The Big Bang Theory and Blossom, she has spent most of the past four months with her sons and Stone — a quarantine pod encompassing two houses. She and Stone have stayed close since divorcing in 2012, continuing to operate very much as a family unit. The pair has never employed a nanny and, as such, Miles and Fred have never been in the care of someone other than Stone or Bialik for more than a few hours at a time, a feat that requires frequent and ongoing discussion about what parenting should look like.

The effort they’ve put into co-parenting has paid off. “It’s brought me to tears several times during this quarantine how grateful I am for how hard we have worked to parent together,” says Bialik. “And yeah, sometimes he makes me crazy and I’m sure I make him crazy all the time! That happens whether you’re living in the same house or not, I’m told.”

Bialik was about the age her sons are now when she became famous. She landed her breakout role playing a young Bette Middler in the cult-classic Beaches (1988), followed by the titular role on NBC’s Blossom (1990-1995), a bittersweet family sitcom that made the 15-year-old a household name. When the series ended, Bialik continued to work but spent most of the next 12 years focused on her education at UCLA, where she earned a Ph.D. in neuroscience, and raising her young family.

“People always told me it goes so fast, and I have to say, it didn't feel like it went fast at all,” she says of early parenthood. “I was ready to have my body back in terms of being able to put my body places that weren't next to my children for most hours of the day.”

No home-schooling parent would choose to work full-time and also school their children from home. We don't do that. Because it's impossible.

In 2010, Bialik returned to television as Dr. Amy Farrah Fowler on The Big Bang Theory and was nominated for four Primetime Emmys and won two Critics’ Choice Awards for the role. She has also drawn on her authority as a scientist in writing four books on subjects ranging from parenting to puberty to veganism. Somewhere in all of this, she has also managed to home-school her sons, though she urges parents currently finding themselves home-schooling out of necessity to be easy on themselves. “What people are doing right now is not home schooling,” she says. “No home-schooling parent would choose to work full-time and also school their children from home. We don't do that. Because it's impossible.” She openly admits her own choice to home-school would be impossible without her ex-husband’s support, and her unique work schedule.

With a CV rivaled only by Barbie’s, the actress/scientist/writer/restaurateur/teacher is looking to add two more roles to the list: screenwriter and director. The film As Sick as They Made Us was announced last year, with Bialik set to direct. A self-described feminist, she admits that her experiences in the male-dominated field of neuroscience did not make the prospect of entering the male-dominated sphere of directing movies any less intimidating. Even though the script, which she wrote, is based on her own experiences, she initially questioned if she was the right person to direct. She says that Stone told her, “If you were a man we wouldn’t even be questioning your ability to do this. You’d come out of film school and be like, 'Give me a film to direct!'”

COVID-19 hit as the production was beginning to secure funding. Making the movie will now depend on the moving pieces of her other projects, including Call Me Kat, a BBC adaptation on Fox which is scheduled for a mid-season premiere this fall. (“We hope,” she notes.)

Bialik has appreciated, in some ways, the “stripped-down experience” of quarantine, and is grateful to ride out the pandemic with the experience of a seasoned parent. “If I had young kids now, I probably would have put a tremendous amount of pressure on myself,” she says. “I would have felt, well, I'm home. What would be my excuse for not making play dough every day and for not doing the perfect enrichment activities and balancing that with healthy snacks? I would have made myself so crazy. So I’m actually really grateful I have older kids who can say, ‘I’m hungry. Remember to feed me.’”

But the pandemic can also feel like a kink in the time-space continuum, slowing and even turning back time. “When I look at their faces, it’s the same face. It’s the same face I looked into when they were babies and when they were toddlers,” she says. “Their bodies get bigger, [but] you can still see that even with a 14-year-old and an almost 12-year-old, they need to feel connected, they need to feel heard. And just like toddlers,” she warns wryly, “they will let you know if you’re not meeting their needs.”