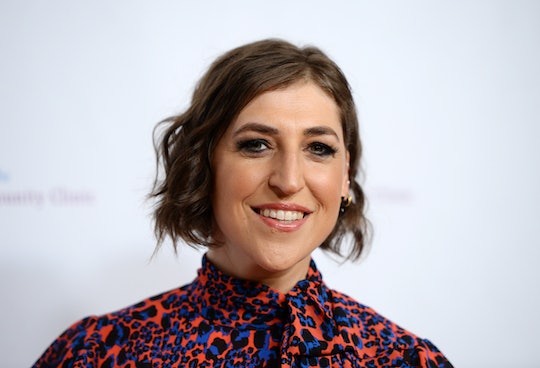 The actress’ two sons, Miles and Frederick, are her everything.

Mayim Bialik is adding one more impressive role to her decades-long TV resumé. On Wednesday, it was announced that she and Mike Richards will replace Alex Trebek as the new hosts of Jeopardy! following his death last year. But between her many roles on shows like Blossom to The Big Bang Theory and now Jeopardy!, it’s clear that Bialik’s kids and family mean the most to her. So as she takes over the reigns of the beloved game show, here’s a glimpse at her life off-screen.

She Has Two Sons

Bialik is the mom to two sons — Miles, 15, and Fred, 12 — who she tends to keep private, so you won’t find any photos of Bialik and her sons on her Instagram feed. Bialik told Romper in June 2020 that this is deliberate, due to the fact that they live such normal lives. “Because we choose to integrate so much into the — quote — regular world, I don’t want [my kids] to be recognizable when we go out,” she explained.

She Co-Parents With Her Ex-Husband

The Big Bang Theory actress was married to Michael Stone for nine years before announcing their divorce in 2012. “Divorce is terribly sad, painful, and incomprehensible for children,” she wrote on her blog at the time. “It’s not something we have decided lightly.”

Bialik is open about how she and her ex have homeschooled their sons, even before the pandemic, with the kids schooling primarily with their dad, while she teaches them things on the days that she has them, she explained to Bloomberg. “It’s brought me to tears several times during this quarantine how grateful I am for how hard we have worked to parent together,” she told Romper. “And yeah, sometimes he makes me crazy and I’m sure I make him crazy all the time! That happens whether you’re living in the same household or not, I am told.”

She Raises Her Sons Out Of The Spotlight

In addition to maintaining their privacy and homeschooling them, Bialik has been open about how she is raising her sons — away from the spotlight, with their own set of values. Bialik, who is vegan, has been open about raising her sons to also be vegan. “You can raise vegan children who are healthy children,” Bialik said in a video posted to her YouTube channel in 2019.

She also has stated that she refuses to get her kids smartphones and makes sure that they are limited with their screen time. This could be why Bialik’s kids have never seen her act on The Big Bang Theory, but have seen her FOX sitcom Call Me Kat. “We’re not really, like, a TV-watching family,” she told Us Weekly earlier this year. “They watch Avatar, things like that.”

Perhaps her sons will be more interested in watching the episodes of Jeopardy! that she will now host. Bialik has already said that her oldest son suggested she guest host the show. “He was really, really, proud,” she told Jeopardy!. “He at his age knows kind of the impact of this show. My 12-year-old is a little less enthralled with me, being in the industry, but I think he knows it’s a very iconic thing.”