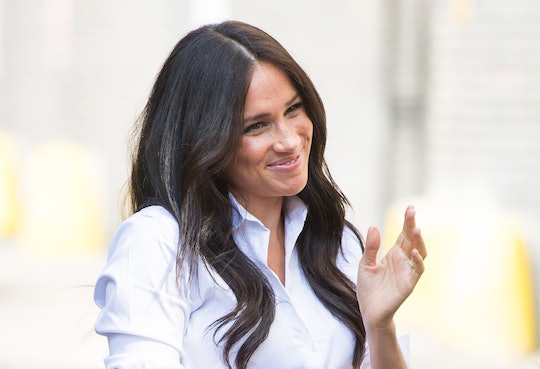 And honestly, who doesn’t love getting a good deal?

If you’ve ever found yourself frantically searching for an online promo code before hitting the check out button, it turns out the Duchess of Sussex can relate. In an interview organized as part of The New York Times DealBook summit, Meghan Markle revealed that even though she’s worth an estimated $60 million she never buys anything online without first finding a promo code, proving that once a coupon clipper, always a coupon clipper.

“I clipped coupons growing up, and now that is ingrained in me,” Markle told New York Times columnist Andrew Ross Sorkin during a recent DealBook summit discussion on advancing women’s equality. “My values have not changed... I will never buy anything online without finding a promo code first. So that’s still in there. It’s a modern version of the same thing.”

Markle’s penchant for promo codes may seem somewhat odd given her former career as an actor and current Duchess of Sussex title. After all, Yahoo! reported Celebrity Net Worth had estimated Markle and Prince Harry’s net worth to be somewhere around $60 million earlier this year. But Markle reportedly didn’t grow up wealthy. Instead, she has said she grew up working to usually just make ends meet.

“I grew up on the $4.99 salad bar at Sizzler,” Markle wrote in an October letter to Congress advocating for paid family and medical leave. “I knew how hard my parents worked to afford this because even at five bucks, eating out was something special, and I felt lucky.”

Markle said she started working at 13 years old with a job at a local frozen yogurt shop and continued to wait tables, babysit, and take other piecemealed jobs to cover her expenses. “I worked all my life and saved when and where I could — but even that was a luxury — because usually, it was about making ends meet and having enough to pay my rent and put gas in my car,” she wrote in her letter.

So although Markle is financially in a significantly different place today than she was prior to landing a role on Suits, she’s maintained the sense of frugality that was ingrained in her as a child. And honestly, who doesn’t love getting a good deal?

But the Duchess of Sussex, who is now a mother of two, wasn’t giving Sorkin a few shopping tips. Rather she mentioned her online shopping habits during Tuesday’s DealBook summit as part of a larger conversation on the importance of teaching young people financial literacy.

“If I was ingrained at a young age to understand more about the stock market or have financial literacy, how different that would put me in the world,” she said. “Imagine what the world would be like if you ingrained other elements of financial understanding especially in young women so that they can move in the world in a different way.”