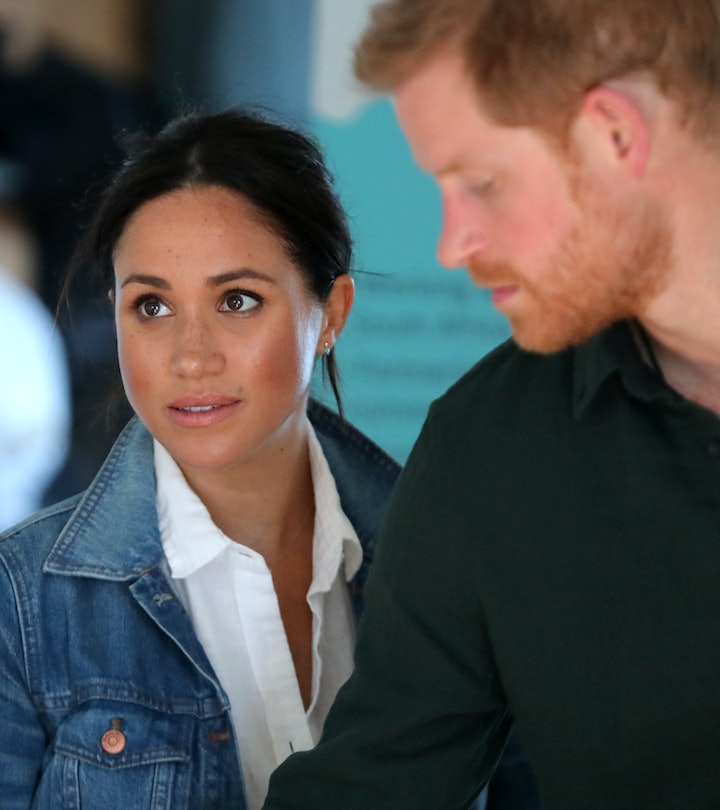 News of calls comes shortly after the couple told Oprah they feared for their safety after the royal family pulled their security detail.

Shortly after the Duke and Duchess of Sussex told Oprah they feared for their family’s safety after the royal family revoked their security detail, data obtained under freedom of information laws revealed police have visited Meghan Markle and Prince Harry’s home at least nine times in the last nine months. According to the PA Media news agency, officers with the Santa Barbara County Sheriff’s Office have responded to a number of phone requests, alarm activations, and reports of property crimes since the couple moved in last summer.

Data obtained by the PA Media news agency revealed police were called to the couple’s Montecito mansion four times in July 2020 — the month Meghan and Harry moved in. Three of those visits were listed as responses to “alarm activations” while the fourth call was noted as a phone request. The next month, police were called for a “miscellaneous priority incident.” In November, another alarm activation drew police to the home.

Then, around 4:14 p.m. on Christmas Eve, police responded to reports of a trespasser at Meghan and Harry’s home. Police were called back to the home the day after Christmas when the same trespasser showed up again. That man — 37-year-old Nickolas Brooks of Ohio — was arrested and charged with one count of trespassing, The Sun reported. Most recently, police responded to an alarm activation call just after 2 in the morning on Feb. 16.

News of the repeated police calls come weeks after the couple told Oprah they had serious concerns about their family’s safety after the royal family abruptly revoked their security detail. In a lengthy interview for CBS, Harry told Oprah he received “short notice” that his royal security detail would be pulled while the couple was living in Vancouver, Canada.

“Their justification was a change in status,” Vanity Fair reported Harry said, referencing his and Meghan’s decision to step down as senior working members of the royal family, a change he claimed was, at the time, still being finalized. “To which I pushed back and said, ‘is there a change in threat or risk?’”

According to Vanity Fair, the royal family no longer provided security for Harry and Meghan beginning in March 2020, a move Harry told Oprah left him shocked. “I was born into this position,” he said. “I inherited the risk. So that was a shock to me.”

The couple was briefly provided security — and a place to stay in Beverly Hills — by Tyler Perry. “We needed a house and he offered his security as well, so it gave us breathing room to try to figure out what we were going to do,” Meghan told Oprah. But even that was temporary.

In July, Meghan and Harry moved into their Montecito home, Vogue reported. The nine-bedroom 18,671-square-foot home sits on seven acres of land and boasts a pool, chicken coop, tennis court, and guest house, according to House Beautiful. To help protect it — and their 23-month-old son Archie — the couple, who are currently expecting their second child, have reportedly arranged for privately funded security, according to MSN.

More Like This
Everything Meghan Markle & Lilibet Have In Common
20 Adorable Photos That Prove Prince William & Princess Charlotte Are Thick As Thieves
Cool Mom Kate Middleton Chatted With A Boy On A Train. He Didn’t Know Who She Was.
Queen Elizabeth Doesn’t Really Get Eat-In Kitchens