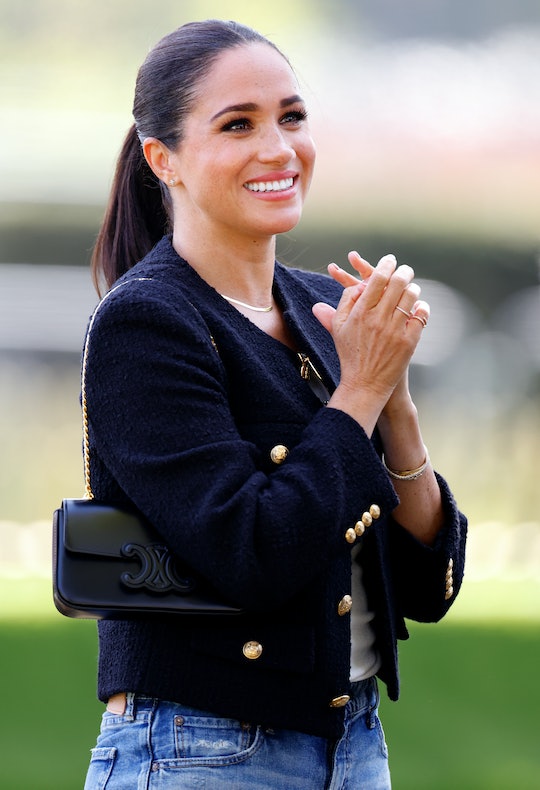 Food security has long been an important cause for the Duchess of the Sussex.

Volunteering at a soup kitchen, food bank, or homeless shelter on Thanksgiving has become a popular tradition for some American families, and apparently the Duchess of Sussex is among those who spent her holiday helping others. Meghan Markle was seen serving Thanksgiving lunch at the Downtown Women’s Center (DWC) in Los Angeles on Thursday, inconspicuous in a baseball hat and face mask.

Markle’s home in Montecito is approximately an hour and a half north of her hometown of Los Angeles (without traffic, naturally — with traffic it’s literally anyone’s guess...) There she spent the afternoon with “the Archewell Foundation Team” preparing and serving 300 residents at the DWC in Los Angeles a Thanksgiving lunch. The event was shared in a brief post on the Archewell Foundation’s website, along with a photo of the duchess.

For more than 40 years, DWC has worked to end homelessness for women in greater Los Angeles through housing, wellness, employment, and advocacy. According to the organization’s website, DWC manages 119 units of permanent housing across greater Los Angeles serving more than 5,700 women annually. They provide a wide array of resources for female veterans and their families, women with severe physical and mental health concerns, and survivors of domestic violence in particular, including access to basic needs such as meals, showers, restrooms, mail, and laundry, as well as health and wellness services, job readiness and employment training, and public education, volunteering, research, and more.

Of course, Markle is no stranger to philanthropy, but while she has been involved in a variety of noble causes — from women’s empowerment to climate initiatives — ensuring food security seems to hold a special place in her heart. During her time living and working in Canada as an actor on Suits, Markle volunteered for the Community Meals Program of St. Felix Centre in Toronto. While living in the UK, many of her charitable endeavors revolved around cooking and food. Her first charitable venture as Duchess of Sussex was assisting in the publication of a cookbook, Together: Our Community Cookbook, which was written by women displaced by the Grenfell Tower fire in London who went on to run their own community kitchen, which Markle regularly visited. Some of the proceeds from the book were in turn donated to Migrateful, on organization that supports refugees, asylum seekers, and migrants by helping them organize cooking classes. She also supported the Salaam Shalom Kitchen, a Muslim and Jewish community kitchen in the UK (the only one of its kind).

Upon returning to California in 2020, Markle did not waste time getting back into the kitchen, as it were. Within a month of their arrival, during the early days of the Covid-19 pandemic, she and Prince Harry volunteered to personally deliver food to Los Angeles residents via Project Angel Food. That summer, she and Harry participated in a drive-thru distribution of school supplies and other critical items to students with Baby2Baby. In founding the Archewell Foundation, she and Harry made Chef José Andrés’ World Central Kitchen a vital partner. Central World Kitchen provides meals in the wake of disasters, and the anchor of the partnership included a financial commitment from Archewell to build community relief centers in areas disproportionately impacted by hunger — Dominica, Puerto Rico, and Mumbai.

This latest Thanksgiving endeavor is just the latest example of Markle’s commitment to battling food insecurity in whatever community she calls home.