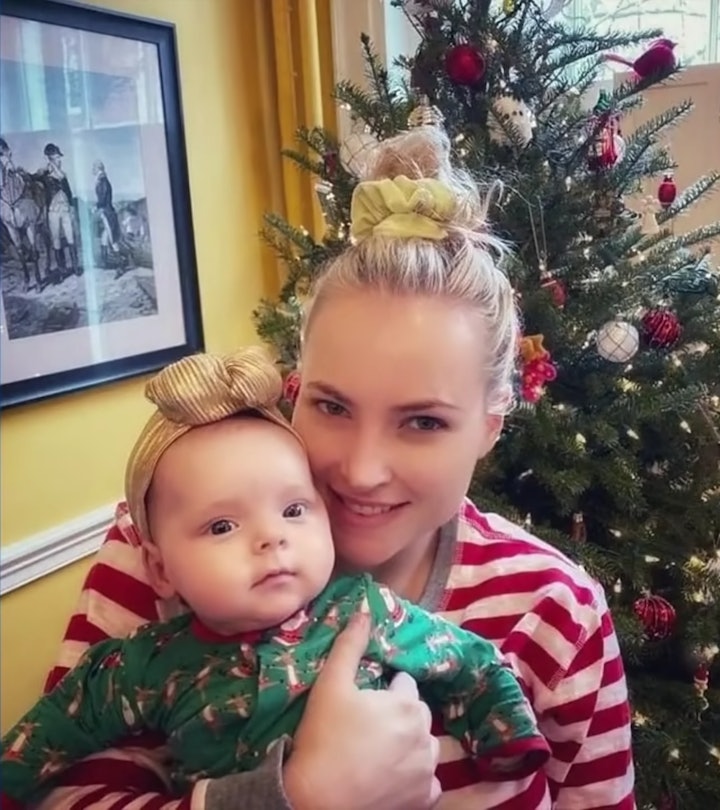 "The whole time I was thinking what a privilege it is to have this kind of maternity leave."

After taking three months of maternity leave, Meghan McCain is back to co-hosting The View. The new mom returned to work Monday to share photos of new daughter Liberty and to advocate for a cause that's since become quite personal. As she returned to work, McCain called for paid maternity leave for all women, saying becoming a mom had made her acutely aware of how necessary such a policy was.

"I think this is something that's really, a really dark spot for our country," McCain said in reference to the fact that workers in America are not guaranteed paid leave. "We are the only developing nation that doesn't supply women with paid family leave."

McCain, who identifies politically as a conservative first and a Republican second, revealed her feelings about maternity leave had changed after she underwent an emergency C-section in September and experienced complications that kept her in the hospital. "When I gave birth, I actually had postnatal preeclampsia and I was in the hospital for a week after on a magnesium drip and it really, really kicked my butt," McCain said on Monday's episode of The View. "I was planning on coming back to the show for the election in six weeks after I gave birth and I was physically unable to."

Recovering from her C-section was "deeply humbling" McCain said, noting she needed her husband and mother-in-law's help to not only care for newborn Liberty but to "do everything from shower to eat." Luckily McCain was able to work with ABC to extend her maternity leave from six weeks to three months. "The whole time I was thinking what a privilege it is to have this kind of maternity leave," McCain said. "Then, as I thought about it, the more angry I got that there weren't women in the rest of America that had the same kind of luxury that I had working here at The View."

While McCain did note that some Republicans have recently voiced support for paid maternity leave, she expressed frustration over the fact such a policy isn't more widely embraced by conservatives and Republicans. "I started getting more and more angry that conservatives in particular — given that we are the party of family values and that everything about our ideology sort of stems from the nucleus of the family – that we are leaving women in this country without the capacity and ability – unless you have an employer that allows you to — to take care of your child, to heal physically, which is something that needs to happen."

She argued providing paid leave to all women would give families the ability to grow and thus enable the country to continue growing. "We as conservatives have to come together and allow all women in this country, no matter where they're from or their socioeconomic class, the capacity to have what I just had, which is three months of bonding time and breastfeeding and healing," she said. "Maybe it takes personal experience sometimes to get on board."

But while motherhood had changed McCain's mind about the importance of paid maternity leave, it doesn't appear to have gotten her on board with paid paternity leave or paid family leave for same-sex couples. "I do think we should start with the mother and then go on to the father as best because it is something that we're going to be have to be meeting in the middle on," McCain said.

Reactions to McCain's newfound passion for paid maternity leave were mixed with many criticizing her for leaving out fathers, gay couples, couples who adopt, and transgender individuals who give birth from her advocacy. "A family leave that only women can take not only reinforces harmful gender roles, but is not inclusive of what a family is or can be," Atima Omara noted on Twitter. "That's why we should have 'family leave.' Pregnant people need the time to recover (not only women give birth). People who give birth don't want/need the full leave but their partner might. Some might not give birth at all and need time for adoption/fostering transition."

Others expressed frustration that the conservative talk show host had needed to personally experience the difficulties of welcoming a new child in order to support paid leave policies. "Wouldn’t it be great to NOT have to personally experience something before realizing it is true?" Preston Mitchum tweeted. "Racism? Sexism? Homophobia? Transphobia? All of it. The *need* for personal experience is deeply rooted in power and privilege, and it is beyond frustrating."

McCain said Monday she hoped The View might opt to make paid maternity leave one of their initiatives for 2021 and pressure political guests on the topic.