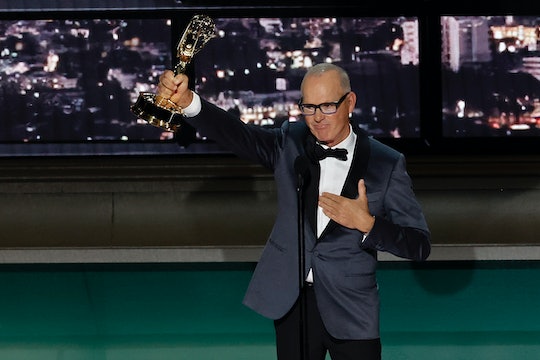 And he had the high honors of receiving an award from Oprah too!

Michael Keaton took home the first gold trophy of the night at the 2022 Emmys for Outstanding Lead Actor in a Limited or Anthology Series or Movie for his role in Hulu’s Dopesick. This is the first Emmy win for the veteran actor and father of three, so it’s pretty sweet that Keaton made sure to thank his supportive parents who he admitted “weren’t exactly patrons of the arts,” but never made fun of him when he reenacted scenes he’d seen on TV as a kid.

While accepting his Emmy, the Batman actor shared a story about his childhood and thanked his family for never making him feel foolish. “I'm a little, little kid my dad wins something at a raffle, and he brings it home and it's this little black and white TV,” Keaton said, describing the TV as “magic.”

“I watched all the cowboy shows and all the comedies, the gangster shows, and I would go, and I would reenact these scenes or create my own scenes and my parents and my brothers and sisters would watch me out the window and to this day, they were never demeaning, they were never dismissive, they never looked down at me, they never made fun of me and in fact they'd ask me to reenact scenes for them,” Keaton shared. “My parents were not exactly patrons of the arts, we weren't patrons of anything frankly but I want to thank them and I want to thank all those people, my family, for never making me feel foolish because I went on to do that several times myself.”

Turns out Keaton learned a thing or two about being a great father from his parents, because he’s also a really encouraging dad himself. The Beetlejuice star is extremely proud of his talented music producer son who has a pretty impressive track record. In an interview with Ellen DeGeneres, Keaton revealed that his son Sean Douglas has made music for the likes of Jason Derulo and even Madonna! He’s also Grammy Award-winner for his work on Lizzo's “Cuz I Love You.” Go figure!

In addition to being a grateful son, Keaton is a gushing father with a history of shouting out his own kids when he celebrates a big win, like when he took home the 2015 Golden Globe for his performance in Birdman. “My best friend is kind, intelligent, funny, talented, considerate, thoughtful – did I say kind? He also happens to be my son, Sean. I love you with all my heart, buddy," said Keaton through tears.

More Like This
Amanda Seyfried Tells Her Daughter To Go To Bed After Emmys Win
Quinta Brunson Got A Sweet Card From A Kid On Abbott Elementary After Her Emmy Win
Mindy Kaling & B.J. Novak Joke About "Complicated Relationships" At The Emmys
Sheryl Lee Ralph’s Speech Was The Most Inspiring Moment Of The Emmys