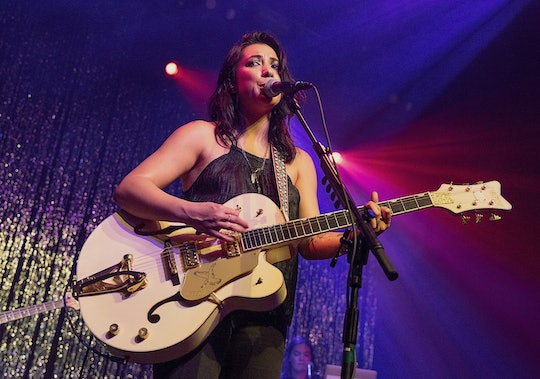 Michelle Branch Opens Up About Suffering A Miscarriage

The singer described the loss as "a dagger in my heart."

In a candid Instagram post about how her family celebrated the holidays, singer Michelle Branch revealed she suffered a miscarriage sometime before Christmas. Although distraught by the news, Branch said she and her husband, Black Keys drummer Patrick Carney, found a way to celebrate the holiday with champagne, a great meal, and some cozy snuggles.

"Just when we were rounding third and heading home (A baseball metaphor?! I know.) 2020 was like, 'nah, I ain’t done yet,'" Branch wrote on Instagram over the weekend. "To further twist a dagger in my heart, I experienced my first miscarriage (ugh! Motherf*cker!)."

While Branch didn't elaborate on when her miscarriage happened or when she'd first learned she was pregnant, it's clear by her social media post that the loss was keenly felt on Christmas. "But alas, between the crying and binge eating of Christmas cookies, I decided to put on lipstick and a dress," the singer wrote. "We drank champagne alllll day. Made an incredible meal and sang Christmas songs snuggled up by a roaring fire."

Branch welcomed her first child, a daughter, in 2005 with her now-ex-husband Teddy Landau. Following her divorce in 2015, Branch began dating Carney. The couple welcomed a son in 2018 and married in 2019.

At least eight people were injured when an explosive detonated inside an RV parked in downtown Nashville, local law enforcement told CNN. According to the news outlet, police responded to reports of gunshots early Christmas Day and found an RV broadcasting both the 1964 hit "Downtown" and a computerized warning about a bomb's imminent explosion. Officers were able to evacuate the people in nearby buildings in the minutes before the explosion, effectively saving dozens of lives, CBS News reported. Police are still investigating to uncover the motive behind the incident.

On Instagram, Branch admitted the events of 2020 had her "limping" towards the New Year but that overall she was incredibly grateful to people like her husband and sister, who'd supported her through the year's challenges.

"[Five] more days until 2021," she wrote. "I’m limping to the finish line. These people, my precious family, my husband, sister, and kids have been the MVP’s. I couldn’t imagine spending a year isolated with anyone else."