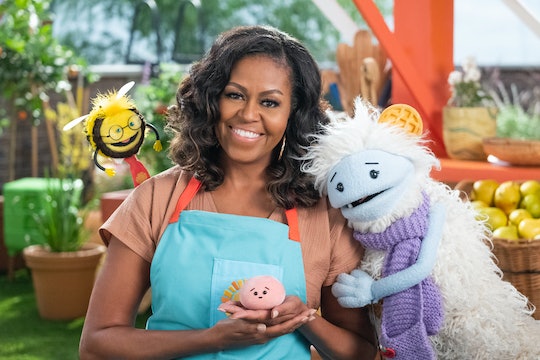 Michelle Obama Has A Kids' Cooking Show Coming To Netflix

Don't we all need adorable little puppets and Michelle Obama encouraging us to eat our vegetables?

Do you like puppets? Do you like former First Lady Michelle Obama? Well good news! Today, Michelle Obama announced her new kids' show, Waffles + Mochi, is coming to Netflix. Premiering on March 16, the new show will feature celebrity guest stars and regular appearances by Obama herself, who said on social media, "It’s all about good food: discovering it, cooking it, and of course, eating it." While the show is for children, Obama thinks parents will get "plenty of laughs — and some tips for the kitchen."

The show follows Waffles and Mochi, adorable little puppets who leave the Land of Frozen Food to follow their dream of becoming chefs. They're hired by supermarket owner "Mrs. Obama," and ride their magical flying shopping cart to discover new ingredients and recipes from around the world.

"In many ways, this show is an extension of my work to support children’s health as First Lady," Obama said in a statement on Facebook, referring to her "Let's Move" program to promote healthy lifestyles among children. "And to be quite honest, I wish a program like this had been around when my girls were young."

Waffles + Mochi also works with Partnership for a Healthier America to get fresh ingredients to families in need throughout America. In addition to getting families excited about working in the kitchen together, Obama also hopes that, in these difficult pandemic times, Waffles + Mochi will bring "a bit of light and laughter" to families everywhere.

On Thursday, Netflix released the official Waffles + Mochi trailer, which Obama introduced across her social media platforms. It giving us our first real look at the charming, colorful world of the show and highlights the many celebrity guests who team up with the aspiring puppet-chefs on their adventures around the world.

See the full trailer below.

The show will be produced by Higher Ground Productions, the Obamas' production company, whose previous projects, including Crip Camp and Becoming, have been well-received. Its first film, American Factory, won an Academy Award in 2020 for Best Documentary Feature. Waffles + Mochi will be their first foray into children's programing and is part of the Obamas' 2018, multi-year deal with Netflix, which seeks to "cultivate and curate talented, inspiring, creative voices who are able to promote greater empathy and understanding." In a statement at the the time, Michelle Obama said, "Barack and I have always believed in the power of storytelling to inspire us, to make us think differently about the world around us, and to help us open our minds and hearts to others."

I, for one, welcome these ridiculously adorable little puppets, as well as a regular dose of Michelle Obama encouraging me to eat my vegetables.

This article has been updated with information about the show's trailer. This article was originally published on Feb. 9, 2021