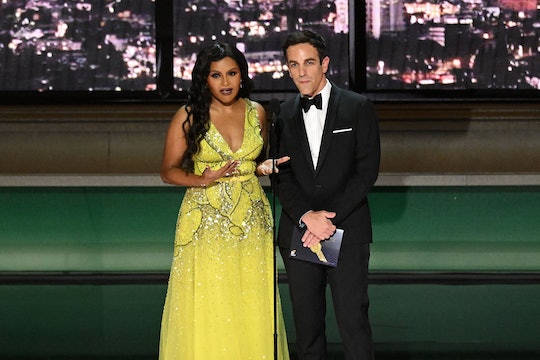 The former couple continues to stoke our hopes!

When Mindy Kaling and B.J. Novak hit the 2022 Emmy stage to present an award together for Best Writing in a Limited Series, they wasted no time cracking jokes and poking some fun at themselves for their much-talked about dating history and “complicated relationship.” Twitter, of course, had much to say about the former flames who, let’s face it, everyone still hopes will get together someday.

Kaling was a vision in yellow and Novak looked extra dapper as they walked onstage as a duo, and the announcer remarked that these two go together like Hennessy and Tupac. With “Baby Love” playing in the background, it was only a matter of time before the cleverness began.

The former The Office costars immediately took some issue with how easy TV-writing seems to be these days, and how short series are too, with just a few measly episodes per season. “And to all the nominees, we just want to say, congratulations you lazy sons of b*tches. How are you getting away with it?...We came up doing network sitcoms — 22 episodes a year,” said Kaling.

“And that show would take up half your life, continued Novak. “No time for other projects.”

“No time for social life. You had no choice but to form insanely complicated relationships with your costar,” Kaling quipped, poking obvious fun of the fact that she used to date the man standing right next to her.

Kaling has recently shared that it doesn’t bother her what people think about her relationships with Novak. And it’s also fine, thank you very much, if people continue to speculate that he’s the father of her two kids Katherine and Spencer.

But the obvious chemistry between these two stars and writers is so strong, Twitter was immediately set ablaze by the appearance of these former paramours.

If these two awesome humans can’t give the people what they want and just get back together already, at the very least they can throw us a bone and reunite to host next year’s Emmys.

More Like This
Queen Elizabeth II's Most Romantic Quotes About Prince Philip
Alec & Hilaria Baldwin Welcome Baby #7, And Revealed Her Cheerful Name
Rihanna's First Post Since Giving Birth Confirmed She's Performing At The Super Bowl
Gabrielle Union Admits She May Be Becoming A Bit Of A Dance Mom With 3-Year-Old Kaavia