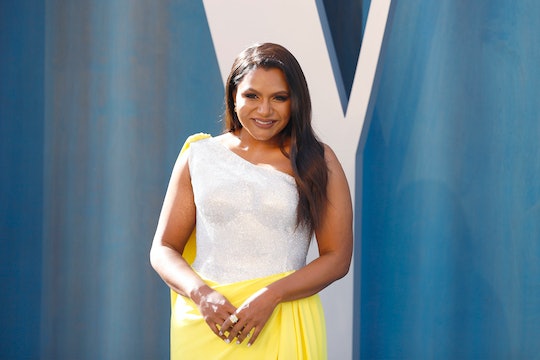 Mindy Kaling was a goddess in yellow at the Vanity Fair Oscar Party, where she wore a glittering silver and yellow Dolce & Gabbana evening gown. But to her daughter, she looked just like Elsa from Frozen. Sorry, but there is no higher compliment.

In an interview with Entertainment Tonight on April 5, Kaling revealed that her kids, Katherine, 4, and Spencer, 1, normally think of her as a “slob” when she’s at home. (Which is honestly so relatable.) That’s why it was so surprising for them to see her dressed up for the Oscars.

“[My kids] normally think of their mom and, 'Oh the slob that writes on her computer all day,’” she explained. “But when I had to get ready for all of these events, [to] my daughter I was like Elsa from Frozen. I became completely transformed and she treated me completely differently. She was in awe.”

Who doesn’t love getting compliments from their kids? Especially because they can be so brutally honest. “I think, because of the pandemic, I hadn't been getting dressed up as much,” she explained in the same interview. “That was kind of fun, to wow her now and again. She is just at that age where that stuff is kind of interesting."

On the other hand, Spencer already seems more laidback. Kaling told Romper, "But my son, he is unlike any person I’ve ever met. He is so smiley and giggly with anybody. And I find that really disarming and nice."

Though she likely won’t wear a sparkly gown, Kaling is planning on walking in the upcoming Pancreatic Cancer Action Network (PanCAN) Purple Stride on April 30, even though she says she’s “not even athletic.” “I'm the ambassador for this because it's this important to me, spreading awareness about testing for pancreatic cancer,” she told Entertainment Tonight. “Sixty communities around the country, everyone’s meeting up to walk and raise money for pancreatic cancer awareness."

Kaling got involved with PanCAN 10 years ago because her mom was diagnosed with stage 4 pancreatic cancer and passed away in eight months. “PanCAN was a website that I looked up 'cause I just had so many questions,” she explained. “We were in so much despair and it had so many resources. Since then, I have tried to support them as much as possible, because they give resources to families and families can find each other. It's just incredible."

Whether she’s looking glamorous on the red carpet or spreading awareness for important causes, Kaling is an inspiration. Elsa wishes she could be that cool!