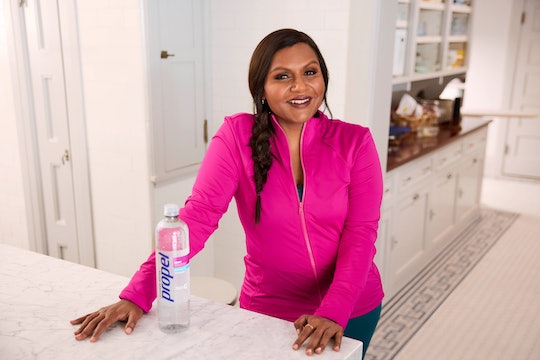 Mindy Kaling’s daughter Katherine may have a future in law enforcement. Or she’s just a 4-year-old looking out for her little brother, Spencer. In a Zoom interview with Romper, The Office alum revealed that her daughter, who goes by “Kit,” is a little “narc” in their home lately. But not in a tattletale way; she’s just protective.

“I think she's getting a kick out of being the protector,” Kaling tells Romper. “Like when my son is doing something she's like, ‘Mom ... Spencer's near a bunch of chokies!” (“Chokies” are, of course, tiny objects he could put in his mouth, as toddlers are wont to do.)

When Kit discovers a “chokie,” Kaling thanks her daughter for her service and puts it out of 1-year-old Spencer’s reach. It’s a mission that little Kit really takes pride in. “She’s really enjoying being a narc and also a little, you know, a police officer in the house,” Kaling jokes. “I think that’s making her enjoy being a sister ... She's like a little bodyguard who tells me anything he's doing that's wrong.”

Hey, everyone has a job.

When Kit isn’t narcing on her little brother, Kaling says her daughter likes to join her on the yoga mat for a nice stretch. Or as Kaling put it, “weird contortions” as she flutters around. “She'll be like, ‘Oh mom, I want to show you my stretch,’ and I'm like, ‘Okay, my 4-year-old daughter, what is the stretch that you love?’ It's usually different versions of twirling or not actual stretches.”

Kit might not nailing a warrior pose any time soon, but Kaling loves these simple, yet special moments with her kids. “I never did that with my mom growing up,” she says. “My parents were so busy setting up a life in the United States that it wasn't like movement and fitness was a big part of their life, and so I really love that at an early age my daughter can see me doing that.”

After giving birth to two children, Kaling has been outspoken about shifting the way she’s viewed exercise and learning to embrace her body. Kaling recently partnered with Propel Fitness Water to help kick off the brand’s new campaign, JOWO — Joy of Working Out. For Kaling, she takes advantage of the “little pockets of the day” to just move, whether it’s stretching with her daughter or chasing her kids around the yard.

“It's very easy to get anxious if you wear a lot of different hats, which is almost every woman I know,” she says. “But for me, it's finding the amount of time to move and to just have that. It brings me so much joy, it keeps me centered, it keeps me focused, and healthy. Working out and movement has replaced therapy for me and it's just an amazing gift to my life.”

And lucky for Kaling, her kids don’t need much convincing. “My kids are just little bruisers,” she laughs. They’re apparently big fans of some “good old fashioned sprinting around the backyard until they get tired and lie down.”

Spencer and Kit’s rough-and-tumble sibling repertoire is “so alien” to Kaling. As a child, she describes herself as “a quiet bookworm who was incredibly shy around other people that just only wanted to talk to my mom.” As different as they may be, she’s enjoying every minute.

“They're just so different than what I was like and I love it. They're completely fearless, and loud, and say what they want,” she says. “I'm really amazed ... I'm trying to learn to be a good parent to that kind of energy.”

Kelly Kapoor would be proud.