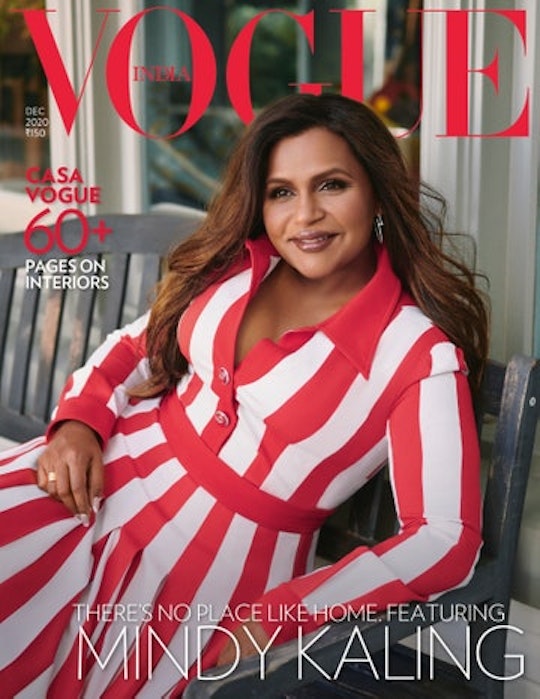 "I was not feeling body confident, and even considered saying no."

When Vogue India asked Mindy Kaling to be the cover of its December issue, she had some reservations. Due to the production timeline magazines run on, the timing of the photoshoot would fall just six weeks after Kaling had given birth to her second child, a little boy named Spencer. But thank goodness she went for it because Kaling's postpartum Vogue cover is gorgeous. Or as she accurately described it, "postpartum pandemic fabulous."

"I was so excited to be asked to be the cover of @vogueindia’s December issue but seriously nervous because I would have to shoot it six weeks after giving birth to my son Spencer," the 41-year-old mom of two recently revealed on Instagram. "I was not feeling body confident, and even considered saying no."

But although the Never Have I Ever creator didn't feel incredibly confident heading into the photoshoot for Vogue India, she's beyond glad to have documented her postpartum period. "Vogue surrounded me with talented and wonderful people, and now I’m thrilled I have these photos as a memento of this very specific time in my life," Kaling wrote on Instagram. “'Postpartum pandemic fabulous' is what I like to call it."

In early October, Kaling surprised fans by revealing that she had not only been pregnant but had given birth to a baby boy during the coronavirus pandemic. "I'm telling it for the first time now, it feels so strange. But I gave birth to a baby boy on Sept. 3," Kaling said in a virtual interview on The Late Show with Stephen Colbert.

"No one even knew you were pregnant!" a shocked Colbert responded.

Kaling later admitted on Twitter that, "being pregnant during the pandemic was a little scary, but it made me appreciate all the doctors, nurses and medical professionals who continue to work tirelessly giving treatment to those who need it, putting their own lives at risk."

But Kaling's recent Vogue cover isn't the first time the actor, writer, and creator has spoken out about appreciating all bodies whatever their size or shape. In fact, she's long been considered something of a body acceptance hero, telling Refinery29 in 2017 that, "Being called fat, being called not pretty, these are just weapons that men can use against women that we can't use against them."

"I am fairly impervious to when people say those things about me, because it's like, well, I was born this way and I can't really change that," she continued.

Although I don't know how anyone looking at Kaling's postpartum Vogue cover could call her anything other than absolutely fabulous.