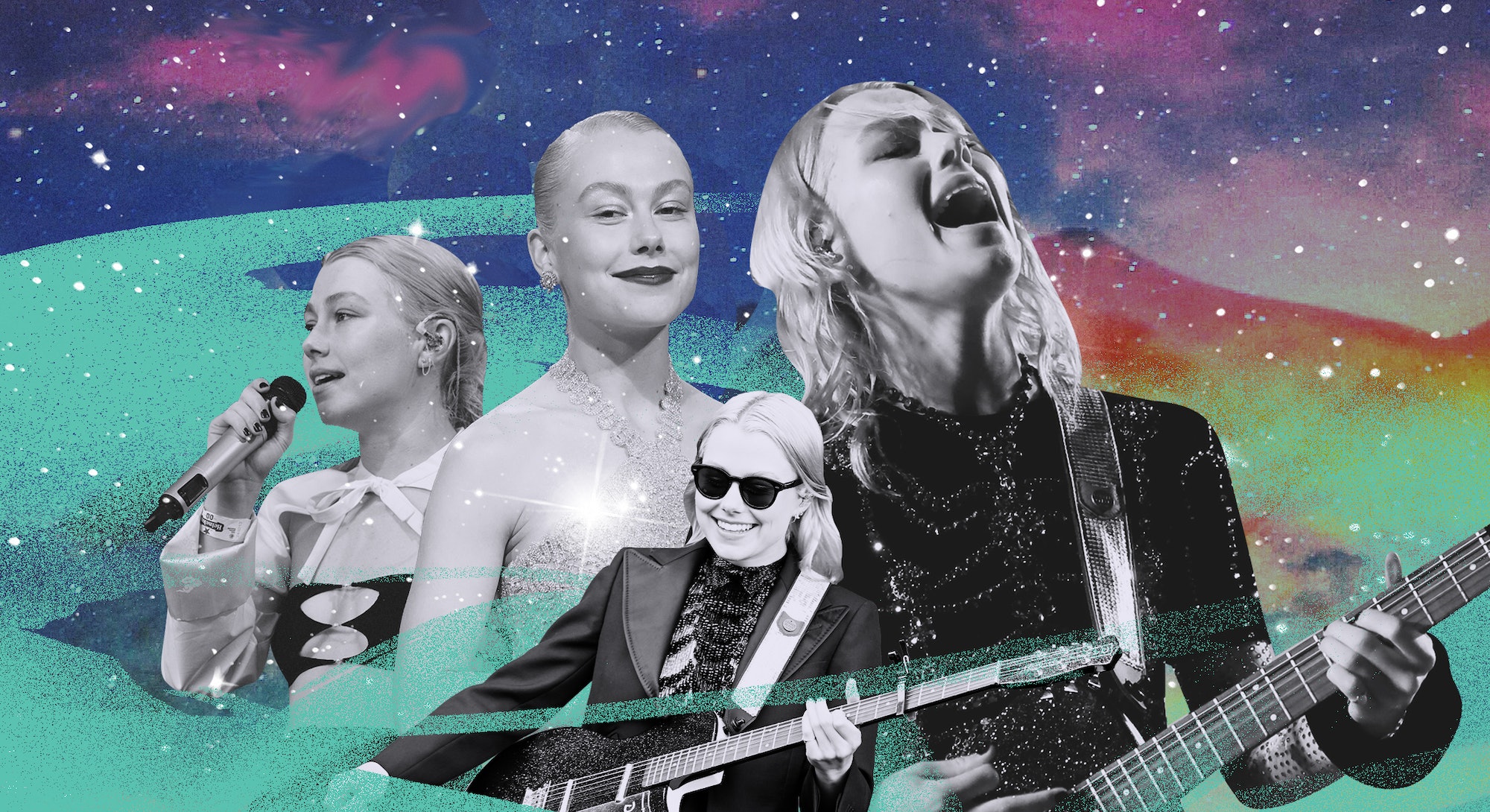 With Bridgers’ music, I can inhabit an old version of myself, invite her back into my life, if just for the night.

I could probably construct this whole essay out of Phoebe Bridgers’ lyrics. I have to resist the urge to plug a fitting one in after every other sentence. My sense is that’s what her music does for so many people. Her lyrics are like little bricks you can rearrange to re-create your own rooms and scenes from the past. Like any good art, it’s in the specificity; the tiny neon details that hit just right and pop out the other side as universality. Last month, the day after I saw her for the first time perform live, I told a mom friend and she replied, “I’d love to see Phoebe Bridgers but I’m worried I would cry the whole time haha.” I get it.

Her writing is evocative of people and things I cared deeply about in my 20s. And the specific heartache of existing in liminal spaces; unable to pin down anything. Always fleeting, never promised. It’s like Edan Lepucki says: “I want to write a whole dissertation about summarized dialogue in Phoebe Bridgers’ songs. The simplicity of these recounted snippets of dialogue at once captures everyday speech while also reframing mundane interactions in a poetic light that reveals how much is below the surface, unsaid, buried, but only barely.” It’s almost impossible once you start listening to her music to not do so on repeat. It’s why I can go for long stretches of time without listening at all. I don’t always have the emotional time, the space for marinating and bruising.

I was late to Phoebe Bridgers. It took me a while to access her out of some semi-willful blind spot. I understood somehow once I fell into her music, what part of me it would tap into. And people kept telling me I would love her so obviously, I stalled. I didn’t have the nostalgia bandwidth. Then the pandemic hit and I was one of the stressed but fortunate, healthy ones who had endless hours working from home with my kids. I had plenty of time to deep dive into her first album, her collaborations, interviews, and videos. By the time her second album Punisher arrived in June 2020, I was ready to hit play at midnight on release day. I knew who Phoebe belonged to, who her rightful fan base was, and honey, I’m not it. She was born in 1994 and while I’m not exactly old enough to be her mom (though technically I could be), I started to notice around this time that I wasn’t alone: Moms love Phoebe.

So when Bridgers played the Forest Hills Stadium in Queens, New York, I was thinking about this blind spot of mine — why I delayed finding her and the ways we overlap on the long solo drive to the show. On paper, the kinship doesn’t make sense. But I recognize the plot points, intersections where she went one way and I turned toward the other. Phoebe and I are both the eldest children of divorce. I see a person who probably grew up too fast, wounded but marched onward and built a deliberate, chosen family. Where she dropped out of college after a semester, I dug in and hid further in formal education because I knew how to do it. I ignored my creative desires to pursue poetry or songwriting. Aside from a few shitty poems in a college lit mag and some unfinished songs, I packed them all away with my BFA thesis, left the creative world, and retreated into graduate school.

Maybe I also miss this version of myself and I can inhabit her for the night, invite her in small ways back into my life. Is this why we mom-types love her?

Phoebe also said my quiet parts loudly. She’s talked about struggling with depression and anxiety (same). She identifies as bisexual. I do, too, but to nobody, really, these days. I spent most of college and into my mid-20s in a relationship with a woman. Until I wasn’t. When I married a man and presented as such, there was no one left to come out to, to share that part of myself with. My older daughter asked me once if I’d ever had a crush on a girl and I told her I had been in a relationship with one and she replied I forgot to buy acai smoothie bowls. Everything about that time — my creative work, my sexual identity — felt like an asterisk and I boxed it away. Phoebe’s music lifts that lid, shines a light in there. But it’s not a footnote to me; more and more it’s burning a hole in my pocket, searching for oxygen.

I don’t want to be, but I’m embarrassed by the younger, capital-E earnest parts of myself. The overly dramatic, overly emotional person who would watch the same movies, listen to the same albums, spend countless hours making mixes and driving to concerts alone, taking home setlists. For reasons that escape me, in ninth grade I sat at a typewriter and typed out the complete lyrics of Alanis Morissette’s Jagged Little Pill for my English teacher. The encore song Phoebe played was “Waiting Room.” It’s a song she wrote when she was 15 and before she played it she said, “I used to say this song was corny but I think what I meant was sincere. And I’m coming back around to that now.” Maybe that’s what I mean. Maybe I also miss this version of myself and I can inhabit her for the night, invite her in small ways back into my life. Is this why we mom-types love her? She puts us back in touch with something that has been untethered from ourselves.

And then there is the major intersection: I became a mom; Phoebe hasn't, not yet, at least in the traditional sense. That night at Forest Hills, she came out and performed with the opening act Muna (who Phoebe signed to her record label, Saddest Factory) and the surprise guest and her dear friend, Lucy Dacus. At one point, she carried her dog, Maxine, onstage along with Maxine’s full-time nanny. This night was the last U.S. stop and her biggest headlining show to date. She is luminous in a white suit, commanding the band behind her literally dressed in skeleton onesie pajamas. Phoebe paused in the middle of the set to thank every single one of them, and each crew member, by zodiac sign — truck and bus drivers, lighting, sound, videographer (her brother), chefs, merch, the nanny, Paul (Mescal, her boyfriend whose job title she aptly quipped was “hunk”). This is an entire ecosystem, I realized, and Phoebe Bridgers is the f*ckin’ matriarch.

I felt like I was watching in real time the umbrella of mothering, and all that falls under it, evolving and radicalizing. Mothering within friendships, mothering as reparenting ourselves, un-moms, pre-moms, moms without kids.

I, too, was a matriarch before I had kids. I spent a lot of time in high school and college holding back hair and making sure people got home safely. Mistaking caretaking for a personality trait, for worth. I sense, or hope, that she found a way to have fun that I never did. But then a few lines into her song “Smoke Signals,” I noticed a group below me in the packed GA all-ages section yelling and waving cellphone flashlights. In the time it took me to form a thought, the music cut out. In a voice I’ve never heard from her, but in a tone I recognized, Phoebe said, “Do you guys need a medic? OK help is on the way.” Then she crossed her hands in front of her and she and the band all quietly waited. Ah, there she is. “And can we get some water passed out?” she added.

There were a lot of tears that night. The moment you step onto the grounds of Forest Hills, there is something sacred, hallowed, and hushed. It sets you up to be slightly dismantled. This is, after all, the house where even Richie Tenanbaum fell apart. Lucy Dacus had trouble getting through her song “Thumbs” without crying, a haunting and spare ballad about the fierce love and protectiveness she feels for her friend when accompanying her to meet the friend’s absentee father in college. They both teared up when Lucy joined Phoebe for “Graceland, Too.” These are love songs about intense friendships, deep and untraditional love, blurred relationships. I felt like I was watching in real time the umbrella of mothering, and all that falls under it, evolving and radicalizing. Mothering within friendships, mothering as reparenting ourselves, un-moms, pre-moms, moms without kids. Angela Garbes just wrote a whole goddamn book about mothering as a community, as a labor movement, and as social change. Phoebe talked about sharing her abortion to normalize it for others. Throw everything in. Big mom energy; I want more of it all.

When I got home from the show, I flipped through social media photos and videos from the night and there were so many tears, from all ages. The three teenage girls in front of me were there with one of their dads. They held hands the whole time and one of them had a test the next day. I had no expectations about crying or not crying. When she played the final song I knew it was coming. I thought I was fine. It's fittingly titled, “I Know The End.” No matter how many times I hear it, the simple lines, "But you had to go, I know, I know, I know," touch on something wordless in me, a moment I'd like to rewrite or revisit (and what is the difference?). It's her voice, it's that precise melody, it feels like an exact memory of my own. She manages to somehow pluck them out of the past and hold them in front of you. I laughed to myself and then the lump formed in my throat. The more I tried to stop it… By the time I got to my car, I was using my shirt to wipe my wet face and neck. I had two hours between me and reality and I sobbed all the way home on the Merritt Parkway.