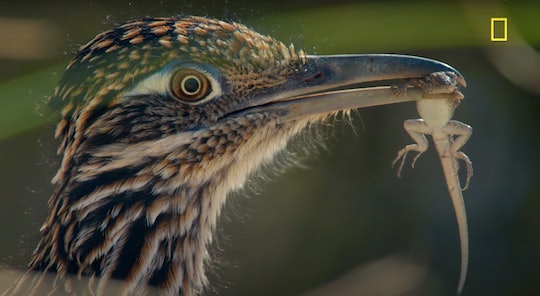 Moms are the world’s fiercest creatures — there’s a reason we call protective mothers “mama bears,” OK? And National Geographic is highlighting some of these awesome moms in nature as part of a new series America’s National Parks premiering Aug. 29. Romper has an exclusive clip of a roadrunner from Big Bend National Park, who hunts for a wide variety of food to feed her new chickies, and it is so cute! Here’s everything we know about the new series below.

What is America’s National Parks?

America’s National Parks was created by the award-winning team behind Disneynature’s Earth and BBC’s Planet Earth. It “takes viewers on an extraordinary venture across world-famous and lesser-known national parks to reveal the diversity and wonder of this beautiful country, from the lush valley floors of Yosemite to the constantly erupting volcanoes of Hawai’i,” according to a press release. The stunning views and close-up wildlife moments are narrated and executive produced by Garth Brooks.

It also features commentary at the beginning of each episode by the First Lady of the United States, Dr. Jill Biden, who will talk about how each national park connects people to a piece of the American story. The First Lady posted a video about her trip to the Grand Canyon National Park in June, where she said, “Our country is filled with natural wonders, where families can learn, play, and explore together. So this summer, plan an adventure and enjoy the great outdoors.”

The series, which is part of Nat Geo’s new annual America’s National Parks Week, uses long-lens cinematography, remote camera traps, and high-resolution drone technology to capture the roadrunner intimately feeding her young, as well as other fascinating moments from the animals that inhabit the parks. The series takes views to world-famous and lesser-known national parks, and it will make you want to lace up your shoes and get outside ASAP.

What parks will be featured in the series?

The series focuses on the following national parks:

Everything from huge bears to tough newts call these wild open spaces home, each thriving in the nuanced ecosystems of America’s national parks. “Some are seen in intimate glimpses, others are television firsts, such as the elusive Mexican long nosed bats feeding at night on the Agave plant in Big Bend National Park,” according to the press release.

How can families learn more?

So your kids are interested in America’s national parks after watching the series? Great! In anticipation of this, National Geographic Books released 100 Great American Parks by Stephanie Pearson, featuring a foreword from Garth Brooks. This book includes travel information, such as where to find the best scenic overlooks and hiking trails, the best (practical) places to spot wildlife, and more, across all 63 national parks and 37 states, recreational, and city parks and green spaces.

What is the exclusive clip about?

Romper has an exclusive clip from America’s National Parks, featuring a mother roadrunner. “We see that while moms come in all shapes and sizes, their love remains uncompromising,” stated a representative from National Geographic about the clip. In it, you can see amazingly detailed shots of the roadrunner searching and hunting for food, then feeding her young grasshoppers, caterpillars, lizards, and more directly from her beak.

The five-part documentary premieres nightly at 9 p.m. EST from Aug. 29 to Sept. 2 on National Geographic, and will be available for streaming exclusively on Disney+ on Aug. 31.