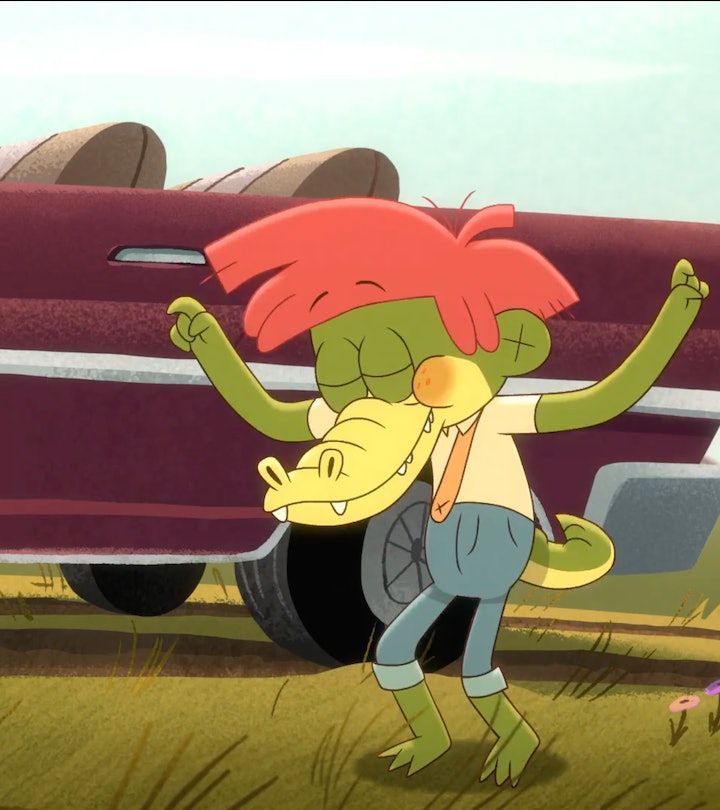 To find his father, Arlo leaves his swamp and heads to New York City. But because he doesn’t know how to drive, his trip gets off to a bumpy start.

Kids will find a new friend in Arlo, an innocent boy from the swamp who is half-human and half-alligator. When young Arlo learns his father is alive and living in New York City, he sets off on a quest to find him and happens upon the adventure of a lifetime along the way. Netflix’s Arlo the Alligator Boy is a musical adventure that kids and parents will enjoy. But viewers be warned: Your family just might be singing the movie’s soundtrack all spring.

Shocked by the news that his father — whom he’s never met — just might be living in New York City, Arlo decides to leave the only home he’s ever known in hopes of connecting with his dad. But trading in his Southern swamp for the Big Apple won’t be easy. In fact, just getting to the big city will be an adventure — as seen in the exclusive clip Netflix shared with Romper.

It sees Arlo, fresh from the swamp, approach two teenagers as they sit inside a car, or as Arlo calls it, a land boat. “You guys happen to be going to New York City?” Arlo asks.

Unfortunately for our young alligator hero, the sight of a talking, bipedal alligator in cuffed jeans frightens the teens right out of the car. “Just take the car!” one teen shouts as he runs away. But can Arlo figure out how to drive and get on the road or will his adventure come to a crashing halt? Take a sneak peek with the clip below.

Directed by Ryan Crego, Arlo the Alligator Boy is a story about friendship and family. And although Arlo, voiced by Michael J. Woodard, is on a quest to find his father, he finds an eclectic group of friends along the way. Together they learn the differences that make us unique and special are meant to be celebrated as strengths and that family is really what you make it.

While the film is set to be a hilariously fun adventure for kids, parents will likely find themselves humming along to the movie’s soundtrack. Netflix has already dropped some of the film’s breakout songs, including Lambert and Woodard’s seriously catchy duet "Follow Me Home.”

You can watch the full trailer for Arlo the Alligator Boy on YouTube. The musical movie is expected to land on Netflix on April 16 and will be followed later this year by an animated adventure-comedy musical kids series called, I Heart Arlo.