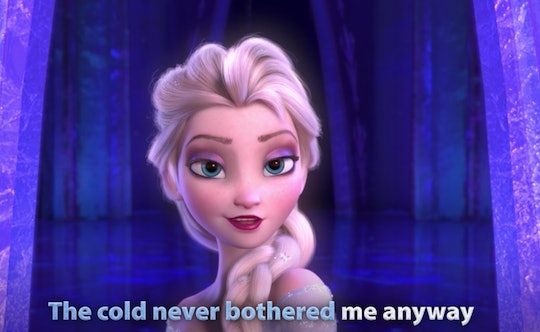 Frozen and Frozen II have gotten the sing-along treatment among other subscriber perks.

As part of its Disney+ Day celebrations, the Walt Disney Company has released sing-along versions of Frozen and Frozen II. Did your child need a version that displayed the lyrics for them? Of course not, they’ve been belting out “Let It Go” word-for-word since before they could read or, frankly, properly pronounce the word “fractal.” But will they be overjoyed by this new turn of events? We think so.

Millennials may recall earlier versions of this format via Disney Sing-Along Songs on VHS (or laserdisc if you were fancy and betamax if you weren’t) and later DVD, which were released from 1986 to 2006. Lyrics for favorite Disney songs (often from movies but sometimes from mid-century shorts) were generally displayed on-screen below the scene in question, with Mickey Mouse icon as the “bouncing ball” that let you know what to sing when.

The new Frozen and Frozen II sing-alongs are the full movies as your kids know and love them, but include captioning during the song sequences which change color as the characters (and, no doubt, your hyped-up child wearing an Elsa dress) is meant to sing them. So this is perfect for birthday parties, family movie nights, or — we’re going to keep it real here — popping open a bottle with your friends and going full-on “former theater kid” on a Friday night because babysitters are expensive but Trader Joe’s has $2 wine and your kids made you watch these movies so. many. times. that you know every song by heart.

Don’t have Disney+? Have you been thinking of changing that? Now’s the time. New and returning subscribers can get their first month of the streaming service for $1.99 through Sept. 19. (Subsequent months are $7.99 each.)

Disney launched its first Disney+ Day in 2019. This year, the official Sept. 8 “holiday” leads into the D23 Expo: The Ultimate Disney Fan Event, which kicks off on Sept. 9 in Anaheim, California and runs through Sept. 11.

More Like This
Disney Drops Strange World Trailer, A New Sci-Fi Movie About A Family Of Explorers
Here's Where The 'Hocus Pocus' Characters Are 30 Years Later
10 Facts About 'The Nightmare Before Christmas' That May Surprise You
Witchy Vibes, Salty Language, & More: What Parents Need To Know About Hocus Pocus 2