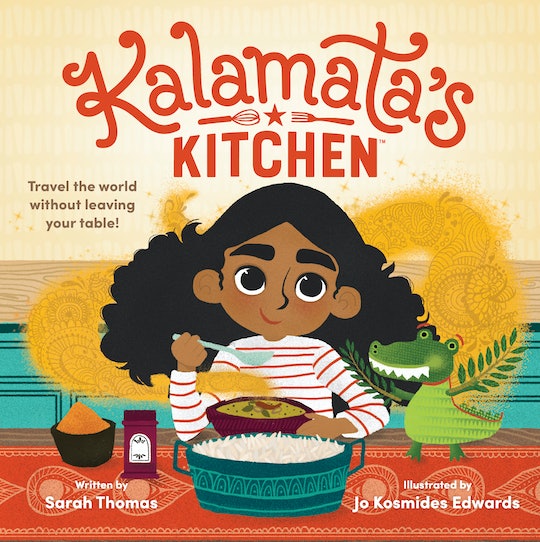 Kalamata takes readers on an aromatic journey as she prepares for her first day at a new school.

A new picture book publishing program formed by Random House Books for Young Readers and the Kalamata's Kitchen entertainment brand seeks to inspire children to explore different cultures through their unique culinary dishes. The first Kalamata's Kitchen book to come from the partnership encourages kids to bring an open mind when trying new things, whether those things are new foods or a new experience. While the book isn't expected to hit bookstores until the summer of 2021, Romper has an exclusive peek at the cover of Kalamata's Kitchen.

First created by Sarah Thomas and Derek Wallace on Kickstarter in 2018 as a series of self-published children's books, the Kalamata's Kitchen brand centers on the culinary adventures of a young South Indian American girl who loves to taste foods from around the world. But Kalamata doesn't just eat her way around the world, she's learning too. In fact, the series aims to use food as a means of introducing young readers to new cultures.

The latest Kalamata's Kitchen book — and the first to be published under Random House Children's Books — will see Kalamata nervous to begin classes at a new school. In an effort to dish herself up some courage Kalamata reflects on a trip she took with her parents to an Indian spice market. Lost amid her memories of the aromatic scents of turmeric, cumin, and mustard seeds, Kalamata remembers what it felt like to try new things and finds the courage to brave a new school.

“We’re so excited to be publishing these new adventures with Kalamata's Kitchen," Sasha Henriques, an associate editor at Random House Books for Young Readers, said in a statement shared with Romper. “These stories celebrate the act of trying new things and experiencing different cultures, which is so important for young readers, especially today. Not to mention, they’re a ton of fun and filled with delicious food references!”

But Kalamata's food-based adventures won't just be found on the page for long. According to Variety, Imagine Entertainment's kids and family arm is currently hard at work developing an animated preschool series based on the Kalamata's Kitchen brand.