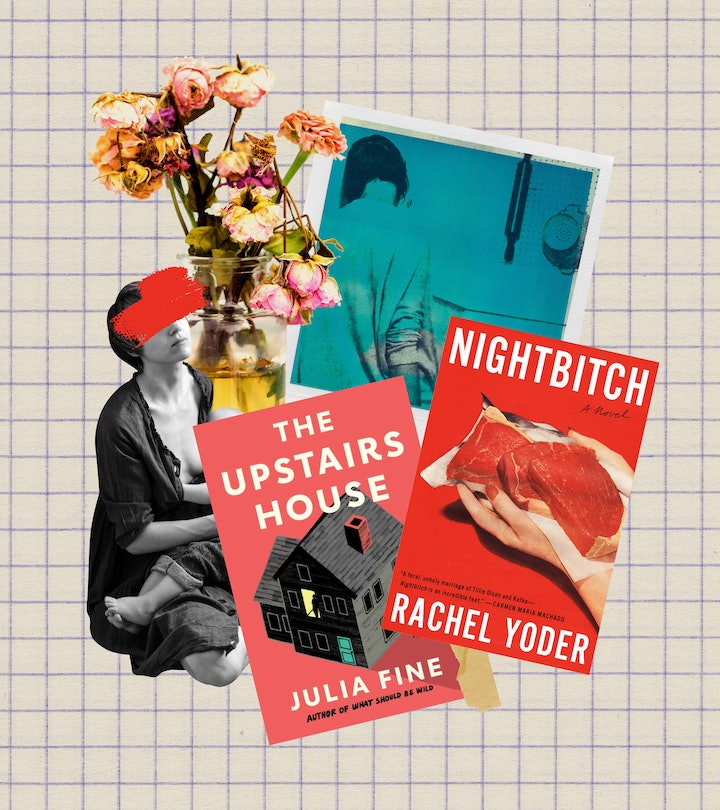 Are these mothers going mad or are they actually experiencing something supernatural? Are the demons within or without? Either way, I recognized myself in them.

The problem begins in childbirth, when your body gets sieved through the colander of motherhood but your soul does not. You watch from afar as your body makes off with the baby, as a nurse mops the blood from your thighs, as your partner gingerly kisses you.

The baby is born but the mother is not. Not yet.

Days blur into nights in a haze of feedings and diapers and never, ever enough sleep. Your body wakes, but you feel nothing. Nothing and rage. Nothing and resentment. Nothing and apathy. Is this what it is to be a mother? Is this who I am now? All rage and breastmilk? Monster, mammal? A ghost of my former self?

Or at least that's how it was for me. In two revelatory novels published this year, I found my experience of new-motherhood-as-dissociation truly reflected. This feels like a deeply unsettling thing to admit about two fictional paranormal horror stories, but it's the truth. Both books tackle the inhumanity of early motherhood by imagining it as a period of paranormal horror (both physical and mental). They show motherhood as a transformation, one that not all of us fully survive. It is, or can be, a snapping of the tether to our former selves, one we might never quite manage to reattach. Sometimes, that’s not the only thing that snaps.

In The Upstairs House by Julia Fine (Harper, February 2021), a new mother is haunted by the ghosts of the subject of her dissertation: children’s author Margaret Wise Brown and her lady lover. The former moves into a nonexistent apartment upstairs, while the latter wreaks havoc in the mother’s home, demanding she continue to write about her. In Nightbitch by Rachel Yoder (Doubleday, July 2021), a mother's rage and longing transform her into a dog. She was an artist, but creating a son meant she had to leave other forms of creation behind. Bored and stifled as a stay-at-home mom to a toddler, she wants more, which makes her a monster. And both books feature so, so many rabbits being killed.

Halfway through Nightbitch, I realized I’d been picturing the events taking place in the house where we lived when my first child was little.

Halfway through Nightbitch, I realized I’d been picturing the events taking place in the house where we lived when my first child was little. It was me, I was imagining myself and my toddler son as the main character and her toddler son, feeling trapped at home in the monotony and mundanity and soul-suckingness of stay-at-home motherhood.

Unnamed main characters may sound like a turn-off, but for me, instead of making me feel removed from them, it left the door open for me to be even closer: to see the family as my own. This book is part feminist indictment of the impossible state America’s mothers find themselves in, and part meditation on maternal fulfillment and rage. It’s also entirely bonkers and entirely relatable, perfectly capturing that impetus toward destruction you feel after everything else has been drained from you.

“It was her goal to make havoc, to leave a mess, to wrest from her form all of the rage and sadness and insanity of these years since her son was born,” we are told of said unnamed Nightbitch protagonist.

The Upstairs House is also a book that says the quiet parts out loud. Like Yoder, Fine's character's inner monologue was often so relatable I felt exposed. The book is a disturbing, uniquely rendered look inside the mind of a new mother struggling with maternal ambivalence. At times, I had to put the book down because it was too painful a reminder of my own difficult first experience of motherhood. It was as if someone had peeked inside my head and pulled out those secret thoughts about motherhood and family I dared not admit to anyone. How could she know? I felt particularly indicted by a throwaway line about needing medication to survive suburban motherhood: “I was still taking the lithium … it allowed me to live in the suburbs. It disguised most of the pain.” I would’ve fled into the woods long ago if not for my Lexapro.

Are these mothers going mad or are they actually experiencing something supernatural? Are the demons within or without?

The struggle of these two protagonists to embrace the mantle of motherhood — to tease out the source of their ennui and uncover the root of their disquieted souls — was my own struggle. I got pregnant unintentionally and spent the early years of my son’s life enraged and resentful, depressed and adrift. An incredibly needy baby, a disconnection from one's artistic endeavors and impulses, a benignly oblivious husband immersed in his work: these are among the many aspects of early motherhood I experienced that both of these books beautifully, painfully depict. On top of all these feelings was the shame of feeling them in the first place, fueled by the mistaken belief that every other mother is happy and fulfilled.

“I thought, if I could only take my body back. If I could just find some space between myself and my child, then I could find my way out of this between where I was always attached, constantly ravished,” the mother in The Upstairs House opines.

On the surface, the question that hangs over both books is simple enough: Are these mothers going mad or are they actually experiencing something supernatural? Are the demons within or without? Both of our unreliable protagonists ponder these same questions. Perhaps the transition to motherhood leaves people more sensitive to the extra-human realm. Perhaps they are so bored and isolated, so dulled by domesticity and trapped in their own minds they unconsciously conjure a vivid, dangerous new place in which to dwell.

What if we invited the ghosts and monsters in — what if we offered them tea and cake?

As an overthinking new mom, the prospect of existing as a mere beast or of relinquishing yourself to ghosts is intensely alluring — perhaps on some days, it's preferable to reality.

According to the prevailing message of our culture, to express dissatisfaction as a mother is to be ungrateful. To want more is monstrous. These two books opened me up to the possibility that being a monster might not be such a bad thing. What if we invited the ghosts and monsters in — what if we offered them tea and cake? What if monster and mother aren’t opposites but synonyms? Maybe it’s only in embracing the beast and welcoming the ghosts that mothers can reunite with their souls.