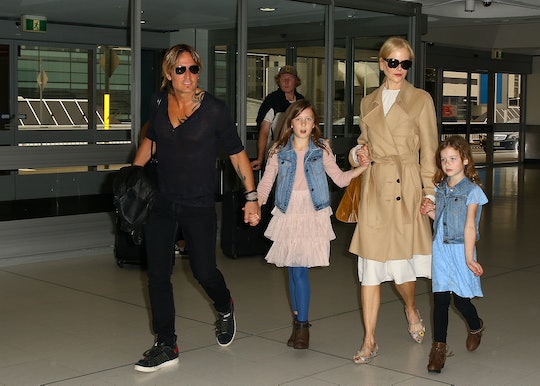 Many celebs tuned in to the 2021 Golden Globes remotely with their families by their sides. Surprisingly, Nicole Kidman's daughters made a rare appearance — sitting alongside their mom and dad on camera. The Kidman-Urban crew tends to be more on the private side, so getting to see the girls was a real treat for fans of the famous fam.

Kidman shares two adopted children with ex-husband Tom Cruise — Isabella Jane Cruise and Connor Cruise — and two children with her husband Keith Urban — Sunday Rose Kidman Urban and Faith Margaret Kidman Urban. When she appeared remotely for the Golden Globe, she was joined on her couch by Urban and their two girls. The actress rarely comments on her personal life or puts her children in front of a camera, so getting to see them during the awards was an unexpected surprise.

Kidman was nominated for her 15th Golden Globe this year, this time for Best Actress in a Miniseries or Motion Picture for her role in The Undoing. And like many of her fellow nominees, she enjoyed the show at home with her family. As she revealed in a recent interview with Marie Claire Australia, she hasn't been far from the girls this year at all.

"We never leave the kids, one of us is always there," Kidman told the magazine. "When Keith went to Nashville and I had to work late nights, I rang [my sister Antonia] and asked her to move in with the girls and she did, and brought along her kids. That's special. It's the nature of what we're all having to do now — you get to be commune-like; this extended family where you're all raising each other's kids together," she continued. "We've all had to go back to basics, and this year has required it because people are pleading for help."

It looks like all of that quality time extends into awards season as well, and the family showed up and showed out, looking fabulous (and so grown up!) for their time on screen.