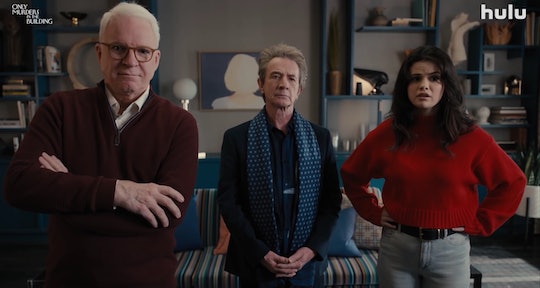 True crime lovers get the ultimate treat in Only Murders In The Building, part parody of murder-focused podcasts, part mystery, and part inter-generational comedy that will leave you in tears. The Hulu Original series stars Steve Martin as Charles-Haden Savage, Martin Short as Oliver Putnam, and Selena Gomez as Mabel Mora, three residents of the exclusive Arconia apartment in the Upper West Side. When a murder happens in their building, the three amateur sleuths decide to make their own detective-style podcast and catch the murderer themselves.

The popular, 17-time Emmy-nominated series — which was already renewed for Season 3! — has new episodes coming out every Tuesday. But before you settle in to watch the addicting whodunit, you may be wondering if your kids are old enough to stream with you. While Only Murders In The Building is definitely not appropriate for younger kids due to the sometimes violent, intense nature of the show, older teenagers will enjoy it as much as you do. Here’s everything you need to know. (Note: spoilers for Season 1 and 2 will follow).

The mystery features a different perspective each week.

Charles, Oliver, and Mabel are the creators of the Only Murders In The Building podcast, where they share clues and theories about murders that happen in their building. Each week is told from a different perspective in the entertaining cast of characters.

In Season 1, the unlikely trio must work together to solve the murder of their neighbor, Tim Kono, before anyone else gets hurt. But the more they learn about the murderer and other crimes in the building, the more they get entangled in danger.

Season 2 brings even more challenges, with Mabel, Charles, and Oliver accused of murdering the Arconia Board President Bunny Folger. As they work to clear their names, the trio also has to deal with being the subjects of a competing podcast and their New York City neighbors who think they are killers.

Violence and gore are prevalent.

This is a show about murder, after all. There are scenes of a cat lapping up blood from a dead body, an exposed brain on a corpse, and a woman with a knitting needle stuck through her chest, and so much more in Only Murders In The Building. Characters are threatened with a gun, poisoned, stabbed, and kidnapped, all with a sense of humor that keeps things light.

Explicit language is riddled throughout the series.

Mabel will be the first to tell you saying “f-ck” doesn’t make you sound cooler; nevertheless, this word and more explicit language is prevalent in Only Murders In The Building. Characters say "motherf-----g," "f--k," "s--t," "d-mn," "godd---n," and "nuts.” One reviewer on Common Sense Media wrote, “There's more language and sexual innuendo than your average R-rated action comedy.”

In one scene, you can see the side view of a breast as a woman takes a shower. In another, two characters share a bed while someone else sleeps on the couch next to them, and she sarcastically calls it an “arousing set-up.” Later, one character tells another, “You’re sleeping with a murderer!” They also comment on how loud one woman is at night, presumably while having sex, and the age difference between two characters who are dating.

When Charles’ stunt double Sazz Pataki (Jane Lynch) comes for a visit, she talks about how she played his double in Brazzos, including the sex scenes because his hip motions weren’t “natural.”

This is a murder mystery with heart.

At its core, Only Murders In The Building is a fun show about friendship.

“The whole premise of the show is basically three characters that were a little bit lonely but found this common ground, and I think that’s what the bulk of the show is — that you know they all have this in common,” Gomez told the Los Angeles Times. “And now they’re all being accused of murder, so it brings us closer.”

Only Murders In The Building is rated TV-MA.

With a TV-MA rating, Only Murders In The Building is technically intended for adults 17 and older. However, Common Sense Media gives it a 14+ age recommendation because it’s a truly light-hearted, enjoyable comedy with some more intense moments throughout. Even kids as young as 12 would likely enjoy the series, as long as you prep them first on the language and violence.

The actors themselves shared some thoughts on what age this show is for in an interview with the Los Angeles Times.

“I have no idea what the demographics are. No one’s ever told me,” Martin said. “I’m always fighting for taking our hard language out, and everybody else is fighting to get it in. So I never know quite where it falls. It’s kind of a family show, and it’s kind of not.”

Gomez said, “After doing the first season, the reaction I got really was warm and lovely and surprising. I don’t know, I would say like 15 and older and beyond.”

Twelve, 14, 15, or 17 — it’s up to parents to determine exactly what age they think is appropriate for Only Murders In The Building. If you’re unsure, you can always watch the series alone first, then re-stream with your pre-teens or teenagers. It’ll be just as enjoyable for you the second (and third!) time around, guaranteed!

Stream Only Murders In The Building on Hulu.