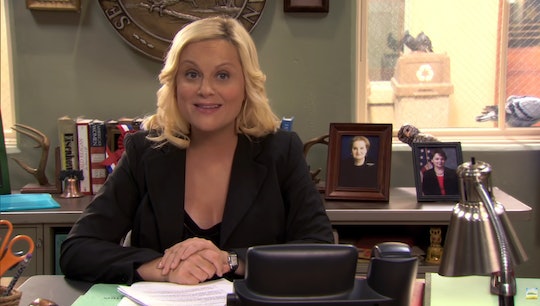 What Parents Should Know Before Watching Parks & Recreation With Your Kids

We all love the hijinks of Pawnee's finest, but here’s what you should know before watching with your kids.

It’s been six years since Parks and Recreation went off the air, but it probably hasn’t been that long since die-hard fans of the show have watched the whole series through again. This comedic classic falls in the great tradition of marathon-watching, and the sharp wit and memorable characters make it something viewers keep returning to again and again. And since one of the main reasons a lot of us had kids in the first place is to share our various fandoms with them, some parents may wonder: is Parks and Recreation appropriate for kids? When is it OK to introduce them to our favorite Indiana government employees?

We have everything you need to consider.

Parks and Recreation is about small town politics and communities

The show – formatted as a mockumentary similar to The Office or Modern Family – follows the Parks and Recreation department of the fictional town of Pawnee, Indiana. Leslie Knope (Amy Poehler), our protagonist, is a mid-level employee in the department and, despite working in government for six years at the start of the show, has the enthusiasm of an overachieving high-schooler running for class president. (Think Reese Witherspoon in Election but without a mean bone in her body.) She loves her town and her co-workers, but dreams of one day holding high office at a national level – as such, every single initiative she takes on (and she takes them all on) is something she considers tremendously consequential. She ropes in local nurse Ann Perkins (Rashida Jones) into becoming more involved in politics and in becoming her BFF.

Her foil is the department head, Ron Swanson (Nick Offerman), a gruff Libertarian who is trying to take down local government from the inside. Yet, despite his grumpy disposition, his true colors generally shine through to reveal a caring person and a good friend. Still, he likes to hire people he thinks will be inefficient, such as morose and monotone April (Aubrey Plaza), self-involved Tom Haverford (Aziz Ansari), unbothered and fabulous Donna (Retta), and the hapless Jerry/Gary/Lenny/Terry/Mailman Barry (Jim O’Heir).

Along with some friends outside of the department, beloved idiot Andy (Chris Pratt), consultants Ben and Chris (Adam Scott and Rob Lowe) and colorful recurring guest stars, the show paints an exaggerated (but not too exaggerated) picture of local politics, the communities they serve, and the communities that are formed when everyone comes together in common cause.

Also there’s a recurring bit with a miniature horse named Li’l Sebastian, and that’s something everyone can enjoy.

The show is a mixed bag when it comes to actual age ratings – some episodes are TV-PG while most fall under TV-14. Common Sense Media suggests the show is appropriate for children 13+ and parents roundly agree.

There are some “adult themes” parents should be aware of

There are also positive messages to take away from the show

Parent reviews on Common Sense Media frequently cite positive messages and a positive role models as being a benefit to the show and it’s true. Leslie is a hard worker who seeks to improve her community while lifting up her friends and giving everyone an opportunity to succeed and grow. Both she and the show are unabashedly feminist, something that shines through in just about every episode. Chris Traeger’s endless enthusiasm and positivity is a source of comedy, but over the seasons his struggles with depression and anxiety are something he begins to tackle with a therapist. The relationships in the show are generally healthy, perhaps mainly in that no character is ultimately defined by a relationship. When relationships are unhealthy, it’s something the characters recognize and talk about.

And, of course, one of the most important positive lessons in the show is about the importance of civic engagement and in the capability of every goofball to effect positive change in their community.

More Like This
Hey Fellas, 'Ted Lasso' Season 3 Is Coming Soon
When Does 'Yellowstone' Season 5 Come To Peacock? Not Soon Enough
10 Parenting Lessons We Learned From Red & Kitty In 'That '70s Show'
'The Last Of Us' Is Based On The Iconic Post-Apocalyptic Video Game