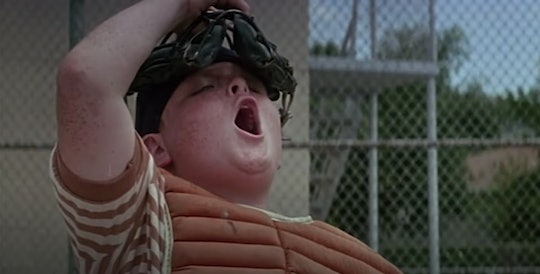 More than 25 years after the film’s premiere, The Sandlot is still teaching some very valuable life lessons. Like the best way to reduce swelling from a black eye is by slapping a raw steak on it. It’s a hack Patrick Renna, who played Hamilton “Ham” Porter in the 1993 film, has carried on his personal life as well. As he demonstrated in a video posted on TikTok, he simply grabbed a raw steak when his son Flynn took a baseball to his eye.

“So Smalls, aka my 4-year-old son, Flynn, got a black eye while playing baseball, and I knew exactly what to do,” Renna explained in the video, before slapping a raw steak on his son’s eye, who giggled during the entire video. “If you know, you know.”

Renna, of course, is referring to the scene from the movie when Scott Smalls is playing catch with his stepfather, and accidentally gets hit in the face by the ball. While Smalls is being comforted by his mom, his stepfather takes a piece of steak and puts it on his eye. The young baseball player is just a little less than pleased when this happens.

But unlike Smalls, Flynn couldn’t stop giggling when slapped in the face with a hunk of raw meat by his own father. His reaction is too cute.

Flynn wasn’t the only one to find this hilarious; Renna’s followers loved his recreation of this moment. “This totally made my day!!” one commenter wrote. “Ahhh that kid is going to CHERISH this one day when he gets it.”

Flynn might not get it now, but he surely will one day. In a 2018 interview with TODAY, Renna said that Flynn wasn’t too interested in watching The Sandlot just yet. “I showed [my son] the movie for the first time, and...well, he’s really big on Moana,” he shared with the outlet.

Who can blame him? But when Flynn is ready to see the film, he (and everyone else for that matter) can watch it on Hulu right now and learn some more important life lessons.