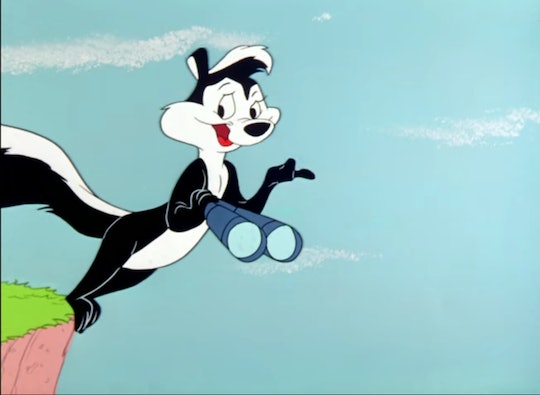 Deadline was the first outlet to report a live-action animation scene originally shot in 2019, which revolved around James and Bugs Bunny finding Pepé Le Pew working in a bar, was ultimately left out of the final film. According to Deadline, the scene featured Pepé Le Pew rather aggressively hitting on a woman played by Greice Santo, kissing up and down her arm in his signature move before being slapped. Upon seeing the skunk’s behavior toward women, James attempts to educate him on consent.

The scene was reportedly filmed under Space Jam: A New Legacy’s first director, Terence Nance, but later cut by the film’s second director, Malcolm D. Lee, Deadline reported. And while news of Pepé Le Pew’s ousting has only just surfaced, inside sources have said the decision came long before Warner Bros.’ skunk became the target of recent criticism in the New York Times.

In 2018, fellow New York Times columnist Jennifer Finney likened Pepé Le Pew’s aggressive advances on his fellow cartoon characters to how Donald Trump treats women. “He kisses females without concern for the revulsion and horror they feel for him,” Finney wrote, a succinct summary of essentially every Pepé Le Pew cartoon ever produced. “Virtually his whole oeuvre is a series of jokes about males who — no matter how clearly the point is made — cannot possibly comprehend the magnitude of their own disgustingness.”

Not everyone agrees with such criticism against Pepé Le Pew. In fact, Linda Jones, the daughter of the man credited with creating Pepé Le Pew and the other Looney Tunes characters, recently told TMZ she doesn’t think the character contributed to rape culture nor does she think anyone watching a Pepé Le Pew cartoon was inspired to commit rape or sexual harassment.

Rather, Jones said the gag was that Pepé Le Pew stunk (he was a skunk, after all) but failed to see how off-putting his stench made him as a suitor. Jones told TMZ she didn’t think Pepé Le Pew should be “canceled” or shelved.

But removing Pepé Le Pew’s character won’t be the only modernizing Lee will have done to the upcoming Space Jam sequel. According to Entertainment Weekly, Lee has previously said he made a number of changes to the character of Lola Bunny — all aimed at turning the previously hyper-sexed toon into a more fully-developed strong female character.

"This is 2021. It's important to reflect the authenticity of strong, capable female characters," Lee told Entertainment Weekly. “We reworked a lot of things [with Lola], not only her look, like making sure she had an appropriate length on her shorts and was feminine without being objectified, but gave her a real voice. For us, it was, let's ground her athletic prowess, her leadership skills, and make her as full a character as the others."