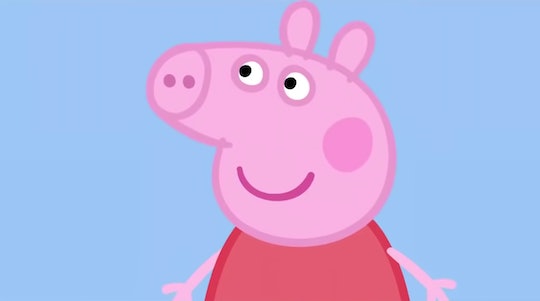 In a since-deleted tweet, Peppa Pig pointed out her album got a better review than Kanye West's new album Donda.

Could Kanye West’s next Twitter feud be with the popular children's character Peppa Pig? The official Twitter account of Peppa Pig, a long-running animated British television program popular with preschool-aged children around the world, recently pointed out that Peppa Pig’s most recent album had garnered a better review than the rapper’s latest album. While the tweet has since been deleted, the burn it brought may prove to be more lasting, at least for West.

“Peppa didn’t need to host listening parties in Mercedes-Benz Stadium to get that .5,” Peppa Pig’s official Twitter account wrote Wednesday when retweeting a side-by-side comparison of Pitchfork ratings for Peppa Pig’s Peppa’s Adventures: The Album and West’s Donda. While West’s Donda, which was released Aug. 29 following not one but three listening parties, earned a solid six from Pitchfork, Peppa’s album earned a 6.5 from the music publication.

In its review, Pitchfork described Donda as “a data dump of songs searching for a higher calling,” noting that when stripped of the context of West’s ego among other things “a significant portion of this album still sounds incomplete, searching for meaning everywhere and coming up impressively short.”

Peppa Pig’s album, however, is described by Pitchfork as “a charming and self-assured celebration of family, friendship, and muddy puddles” and Peppa herself is applauded for her innate ability to mine “the mundane stuff of suburban life” for what Pitchfork called “glittering moments of camaraderie.”

But while Peppa Pig is well-known for her sass and attitude (and West isn’t the first musical artist Peppa has gone toe-to-hoof with on Twitter), it seems the folks running Peppa Pig’s Twitter account apparently had some second thoughts about the tweet. According to Insider, it was deleted a few hours after it was posted — although not before others had already screenshotted and shared the tweet.

In 2019, Peppa Pig dropped her first album, My First Album, the same day Iggy Azalea dropped In My Defense. Upon learning of their same-day release, Azalea joked “It’s over for me now” while sharing Peppa’s album promo on Twitter. When Peppa responded with a gif of herself wearing a crown, Azalea threatened to turn Peppa Pig into “a breakfast special” unless she agreed to collaborate.

But will Peppa’s most recent Twitter burn lead to a collab with Kanye? Don’t hold your breath.