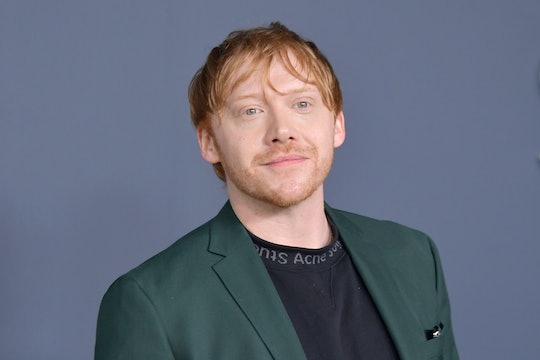 Sorry guys, he did not name her after a Harry Potter character.

At the end of the Harry Potter series, in the epilogue of Harry Potter and the Deathly Hallows, Ron Weasley is revealed to be married with two children. Now, it seems as if Rupert Grint, the red-headed actor who brought the character of Ron Weasley to life in the Harry Potter films, may be following in the beloved character's footsteps. After finally joining Instagram on Tuesday, Grint shared a photo of his new baby.

"Hey Instagram....only 10 years late, but here I am," Grint wrote in his first-ever official Instagram post, which featured a selfie he'd snapped while holding his first child with longtime girlfriend Georgia Groome. "Grint on the Gram! Here to introduce you all to Wednesday G. Grint. Stay safe, Rupert."

While Wednesday isn't facing the camera in the snapshot Grint shared Tuesday, her chubby hands, tiny ear, and peach fuzz hair are enough to melt even Voldermort's heart.

According to E! News, the new dad welcomed his first child with Groome in May. "Rupert Grint and Georgia Groome are delighted to confirm the birth of their baby girl," a rep for the couple told E! News at the time. "We would please ask that you respect their privacy at this very special time." Like a lot of parents, Grint and Groome seemed content to keep the precious first months of parenthood to themselves and opted not to immediately share many details regarding their family's newest member.

In fact, it wasn't until Tuesday, that Grint let fans in on the fact that he and Groome had named their adorable daughter Wednesday. The actor did not, however, reveal what the initial G in his daughter's middle name stood for. Could it be Ginny?

While Grint's entry into fatherhood means I'm undeniably getting old (wasn't it just yesterday that teenage me was seeing Harry Potter and the Sorcerer's Stone in theaters?), it's not altogether surprising. In a 2018 interview with The Guardian shortly after turning 30, the now-32-year-old actor said he was keen to settle down and have kids. "I’d like to settle down and have kids soon," the paper reported Grint said. "If I had a son, would I call him Ron? It’s quite a good name, but probably not. And Grint’s a tough name to pair a one-syllable first name with."

Looks like Grint opted for a two-syllable name in the end.