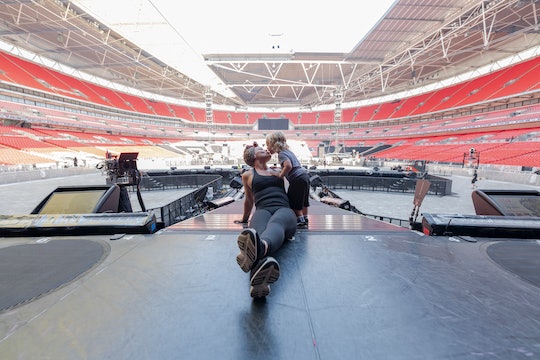 Talking to the singer and performer about parenting on tour, on camera, and then, in a pandemic.

Alecia Beth Moore, who most of us know as Pink, the Grammy-winning singer-songwriter known for her acrobatic performances and take-no-sh*t attitude, says she had every intention of 2020 being more relaxed. Daughter Willow was back in school and son Jameson was gearing up to start preschool. Her husband, motocross competitor Carey Hart, was excited to refocus on his career. Pink herself? She had just wrapped up her Beautiful Trauma World Tour, and, after 156 performances in 18 months, she was entitled to taking it easy for a bit. “It’s kind of the year of the family,” she told Entertainment Weekly in November 2019.

Little did she know, with the pandemic afoot, just how much of a family year 2020 would be. She recently sat down with Romper to talk about climbing the walls, finding solace in ritual, and about her new documentary, All I Know So Far, which follows a European leg of her 2019 world tour.

As she blends her roles as performer, boss, and mom into a singular identity, the doc begins to feel like an ode to working mothers everywhere.

All I Know So Far definitely gives the viewer vicarious doses of stadium concerts and world travel, but more notable, at least for our purposes, is how present her family is throughout. We see her husband and two kids on the tour bus, backstage at rehearsals (often hanging from set pieces), onstage during shows, and zipping around 50,000-seat stadiums on a hoverboard like it’s their driveway at home. In this way, we follow Pink as she blends her roles as performer, boss, and mom into a singular identity, and the doc begins to feel like an ode to working mothers everywhere.

In fact, there are only two times in the entire film I can remember her being alone: once doing her hair in her dressing room (“No one knows how to do this hair like I do,” she says) and once doing vocal warmups in a hotel room, even though Jameson wanted to join her (a poignant mom guilt moment, for sure).

Now that the family is home in Santa Barbara and has been for about 18 months, she says, the constant company has continued. Still, she tries to keep it in perspective for the same reason she brought her kids on tour — she knows this stage of parenting, and life, for better and for worse, doesn’t last forever. “My kids still sleep in my bed,” she says. “Some people are like, ‘Don’t you just want your space?’ And I’m like, ‘Yeah, but I know I'm going to get it.’ I know in a flash, they’re going to not want to be around me at all. They’re going to have their own lives and I’m going to miss it terribly.”

You can tell from what we see of their family dynamic in the documentary footage that their communication style is open, jokey, and deeply affectionate: Cuddles and talking about feelings abound. Pink (and Hart) don’t seem to avoid deep, meaningful discussions with their children but embrace the opportunity to explore feelings, needs, or learn new words (at one point in the doc, Pink urges Jameson to say “resilient”). I tell Pink that from what I saw, she doesn’t seem to have a special “mom voice” for parenting discussions.

“I definitely have a wife voice,” she says conspiratorially. “Just like that low-lying resentment that nobody else can quite place.” She laughs.

“I never thought of that, but I take that as a huge compliment” she says, mildly but pleasantly surprised. “I think it’s probably because of the way my dad raised me. He used to read poetry to me and sing to me at night, and we would jam with his guitar, and he would always talk to me about the world and his experience in it and what he hoped for, and he was a total dreamer and he never spoke to me like I was anything other than a smart person,” she explains. “So maybe that’s where it comes from.”

“I definitely have a wife voice,” she says conspiratorially. “Just like that low-lying resentment that nobody else can quite place.” She laughs. “Wait, before he came into the kitchen, just now I was in a really good mood. What just happened? I’m not even sure what happened. I feel anger!” She notes that the kids are getting a bit on edge after being cooped up for a year as well. “They’re in such a bicker stage right now,” she groans. “It’s driving me bonker-towns.”

But watching All I Know So Far, you can see the unique rapport she has with each child, something she’s been able to deepen with an unplanned year together. Willow is her self-possessed “soul child,” and their bond is extremely close, and Jameson is a little boy with a big personality who commands the attention of any room he’s in. (He reminds Pink of someone she knows…) In him, the tenacious performer recognizes that she has found her match, and she’s appreciated the bonus year with him the pandemic afforded her. “He was supposed to start preschool this year,” Pink says. “I got another year with him that I would have never had.”

​These relationships are organic, but intentional. Pink is someone acutely aware of personal and family cycles and the “intergenerational sadness” that goes along with them. She was determined to do things differently than her parents, determined not to have the relationship with her children she had with her mother.

This awareness of cycles also manifests as a deep love of ritual, which was fostered growing up in a Jewish-Catholic household. “In Sunday school and Catholic school, before I got kicked out, I loved going up and saying, ‘Body of Christ’... and then getting that little paper wafer​,” she recalls, laughing. ​” And then when I would go home to dinner, I would take my white bread and roll it up into balls and then smash it into a paper wafer and put it on my tongue while we were eating dinner!​”

While a makeshift communion host is no longer part of her routine, lighting candles and singing songs help her in moments of sadness and loss. “I just think life is really short and I find comfort in ritual,” she says. She’s proud to have broken family cycles, both with and for her parents, but there’s a beauty, she thinks, in seeing your place in them.

“For my kids, I wish there was a long game where we knew if anything we were doing was actually going to work, but we just have to wait and see,” she says. “But in the meantime, what can we count on? We can count on rituals. We can count on gratitude. We can count on taking care of ourselves the best we can. That’s it.”

All I Know So Far premieres May 21 on Amazon Prime Video.