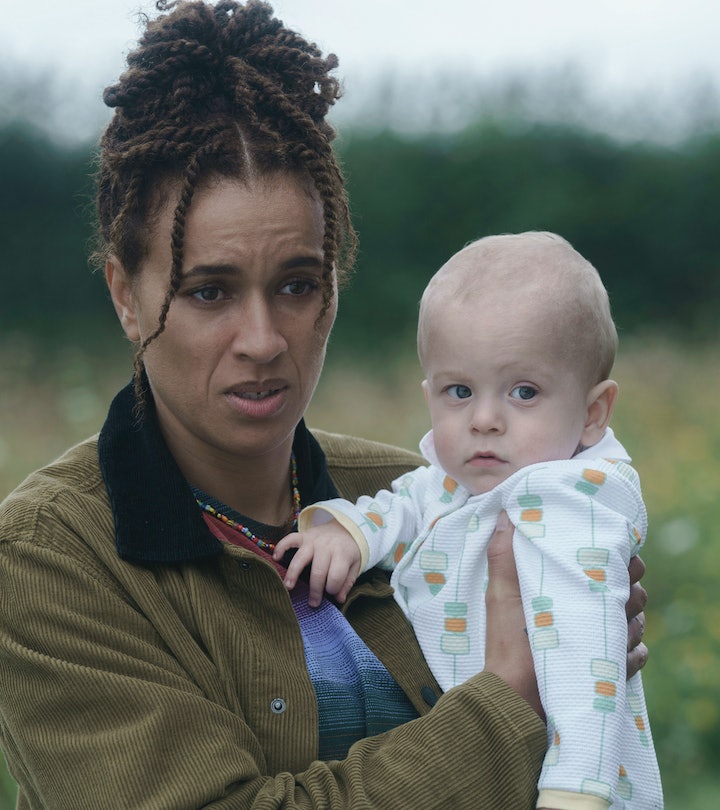 Even if your baby isn't evil, the vibes will be familiar.

I’m laying, unmoving, in the dark. Any sliver of light that might enter the room is stopped by thick blackout curtains. There are scratches on my upper arms from where sharp nails raked across the skin just a bit earlier.

Staying still as possible, I count the seconds until I dare try to move. To 500. To 1,000. It’s been almost an hour since I finished reading her bedtime stories. Almost two since I bounced, swayed, and walked her baby sister into a deep enough sleep that she could be put down in the crib — her scratching me the whole time in some sort of perverse new self-soothing she’s taken to.

Bracing, hopeful, I chance an escape, moving quietly to not disturb the sleeping body next to me. I’m out of the bed. I’m at the door. I flood with relief and the dizzying taste of freedom…

I sigh. Freedom thwarted, I climb back into bed for more hand-holding and back-rubbing and sleepy-time songs.

As I start the count again, I can’t help but think about how true the hook of HBO’s new horror-comedy show The Baby is:

That kids are freaking evil.

It’s not necessarily a new concept. From The Bad Seed to Rosemary’s Baby to The Omen, evil kids have played on some of our most primal fears around the inherent nature of good, an incomprehensible inability to control or influence who our offspring become, and the tenuous relationship we all have to purity and innocence. And while The Baby sticks to many of these tropes, it also expands into something brand new and disturbingly recognizable to any new parent. The evilness of the titular baby in the show is not confined to the child himself, but instead seeps into the entire, off-kilter world.

For a show about a non-mother and an evil baby, the most surprising part of The Baby is how shockingly spot-on it is about the realities of motherhood, particularly the surreal experiences of being postpartum.

In the vein of It Follows and Final Destination, HBO’s The Baby focuses on baby-averse Natasha who inherits a kind of fatal curse, this time in the form of a baby that falls from the sky into her arms. Forced by a series of horrific yet comedic deaths supposedly caused by the evil baby (under the baby's care, each “mother” the baby has been passed to throughout history dies a grisly and ridiculous death while caring for it), the subsequent plot follows Natasha as she tries to uncover the mystery of how said baby came into her possession. And, perhaps more importantly, how she can rid herself of the responsibility of parenthood while somehow escaping their fate.

Watching the first few episodes, I was struck by the funhouse mirror reflection of life with a young baby, arguably one of the most disorienting periods of a mother’s life, and the way that Natasha’s experiences may have been distorted and oversized, but were utterly truthful at their core.

In the pilot, after Natasha catches the baby and calls the police, two officers show up and immediately ask Natasha for a glass of water. They are unmoving and unhelpful as she juggles the baby in her arms while trying to fill a glass from the sink. It is not necessarily their lack of assistance that is recognizable (though anyone who has had visitors postpartum likely has some experience of being expected to play hostess while still bleeding, leaking milk, and sleeping in hour stretches). Instead, the assumption of the two (male) officers that Natasha, by grace of being the one holding the baby, has some sort of innate mothering ability, some sort of natural talent that allows her to continue fulfilling her supposed obligations to the world while simultaneously caring for a child — despite the fact that she clearly does not.

The clear desperation Natasha feels, the absolute panic at needing to accomplish this seemingly benign task of getting a baby to sleep, is almost laughably recognizable to anyone weeks into a postpartum haze.

It's a common refrain because it’s true: After having a baby and spending a minuscule amount of time in the hospital, you’re sent home without an instruction manual. Which really means without help, without support, but with the pressing demand to simply know what to do — and not only know what to do with regard to raising a child, but with regard to being a person, a person who is now tasked with keeping alive and caring for a wailing, writhing, fragile creature day in and day out. The glass of water isn’t just an obnoxious request, it’s a stand-in for all the things new parents are suddenly tasked with figuring out because our society refuses to help figure it out for them (the stairs and doors and transportation systems impossible to access with a stroller, the lack of changing tables in public restrooms, inadequate places to breastfeed while out). New mothers navigate these things, typically alone. And all the while it feels like society keeps asking for a cup of water.

In a later episode, Natasha pays a ridiculous amount of money to access a kiddie play place and is enveloped in an alternate sort of mommy-world where inhabitants speak a different language (“I need the Bun-Bun!”) and adhere to different social norms (a mother confesses to wanting to bash her baby’s head against the wall, laughing a you-know-how-it-is chuckle the whole time). Natasha has fallen into this Mommy-Wonderland in a desperate attempt to find a particular baby accessory (the above-mentioned Bun-Bun) that is the only way to put the baby to sleep, a most critical element as the baby can only be killed while he’s sleeping. Putting aside infanticide for a moment (the baby is evil, remember!) the clear desperation Natasha feels, the absolute panic at needing to accomplish this most impossible, yet seemingly benign, task of getting a baby to sleep, is strikingly, almost laughably, recognizable to anyone weeks into a postpartum haze.

There are many other oversized moments that any parent will immediately see truth in. A scene featuring a woman collapsing a stroller had me cringing and howling in equal measure, the gruesome fate that befalls her intimately familiar to anyone who has struggled with “easy-fold” baby gear. There’s a poke at the recent trend of gentle parenting, a gaggle of creepy kids parroting the absolute nonsense philosophy: “We don’t raise our voices in anger, we only raise them in joy.” Natasha is told to “go and have five minutes for yourself” when she asks someone to watch the baby so she can use the bathroom — because, as the world wants moms to think, your shower counts as self-care time!

But, most disturbing, is how throughout these episodes, no one in Natasha’s life is concerned about Natasha herself — her world irrevocably altered. As she tries to explain the danger associated with the baby with increasing urgency, friends and family look back at her with sad eyes, reassure her it’s OK that she’s struggling, and offer her a nap. This type of bewildering reaction to distress is something I experienced, particularly as I struggled through postpartum depression and anxiety. Everyone, it seemed, had accepted my motherhood before me and was expecting me to swim gracefully in its waters while I was dog-paddling for survival. Life with my infant daughter was as unrecognizable, disorienting, and farcical as it was for Natasha — even though my own baby wasn’t dropped from the sky — and as I tried to explain, with increasing agitation, that something was wrong, everyone simply kept assuring me that this was what motherhood was.

As Natasha’s old-lady guide to her evil baby explains: “He’ll bulldoze your life.” Watching Natasha, it’s impossible not to think of how we force women through the trauma of labor and birth and then send them home mere days later, to care for tiny humans in a country wholly lacking any sort of mandated paid leave or universal child care; just a smile and a tsk about trying to get more sleep or, worse, as friends and family tell Natasha, “It’s just a baby.” It’s a sad refrain that is now, horrifically, impacting all people with the capacity for pregnancy. As Roe stands poised to be overturned, removing the option to access abortion for millions, we’re going to see the devastating, lifelong consequences of this combination of force and lack of support. The wholly insufficient aid for parents is tragic enough when one chooses to become a mother; it is ruinous for those who aren’t even allowed that choice.

The advice most new parents get (and, arguably, the least helpful) is some form of “cherish every moment.” Sometimes it’s along the lines of “the days were long but the years were short” or the oddly threatening “there will be a last time they want to cuddle!” The Baby, thankfully, is a show that turns this gaslighting idea on its head, getting closer to the truth of early motherhood: sometimes it’s not oh-so-hard but oh-so-fulfilling. It can feel sinister. It can feel inescapable. It can feel like you are dealing with an evil hell-bent on ruining your life.

After two years of COVID-mothering, and being left out to dry as our leaders allowed the already perilous safety nets, from reproductive rights to the child tax credit, to fray around us, The Baby forces viewers to ask diametrically opposed questions: What must mothers do to protect their children? And, more important but rarely asked: What must mothers do to protect themselves?