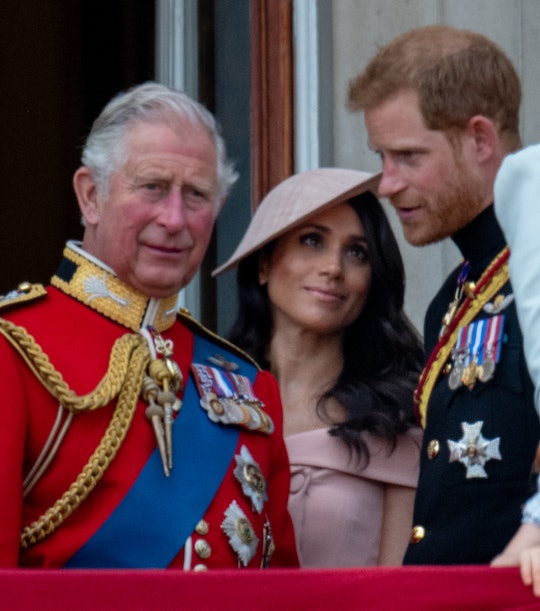 A new book alleges Prince Charles made comments that were later twisted by royal advisors before being shared with Prince Harry and Meghan Markle.

A new book about Britain’s royal family has renewed speculation about which member of the royal family allegedly raised concerns about the skin tone of Prince Harry and Meghan Markle’s children. In his new book, royal family tell-all author Christopher Andersen claimed Prince Charles once questioned what sort of “complexion” Prince Harry and Markle’s future children might have. Although the Prince of Wales has denied the claim, Andersen said Prince Charles’ comments were benign when first uttered but later twisted and “weaponized” when re-told to the Duke and Duchess of Sussex.

According to Page Six, Andersen has claimed in his book, Brothers and Wives: Inside the Private Lives of William, Kate, Harry and Meghan, that Prince Charles pondered what his grandchildren might look like in a conversation with his wife, Camilla, Duchess of Cornwall, on the morning that Prince Harry announced his engagement to Meghan Markle.

“I wonder what the children will look like?” Page Six reported Prince Charles is alleged to have said.

Andersen reportedly claimed Camilla was “taken aback” by her husband’s comment and assured him Harry and Meghan would have “absolutely gorgeous” children.

“I mean, what do you think their children’s complexion might be?” the book alleged Charles responded.

Earlier this year, Harry and Meghan revealed there had been discussions within the royal family about their son’s skin tone in a wide-ranging interview with Oprah Winfrey. “In those months when I was pregnant [there were] concerns and conversations about how dark [Archie’s] skin might be when he was born,” Meghan said, noting the conversations had involved Harry and had been relayed to her.

In his book, Andersen does not go so far as to claim Prince Charles was the royal responsible for raising such discussions. In fact, he has argued the Prince of Wales’ comments were merely the “benign” speculation of a soon-to-be grandfather.

“What I'm saying is that on the morning the engagement of Harry and Meghan was announced, in a very kind of benign way, Prince Charles started to muse on what their future grandchildren might look like,” Andersen said Monday during an interview on Today. “Here's this beautiful, biracial American woman and the world's most famous redhead. I'm a grandfather, of course we all do this, speculate on that.”

According to Andersen, Prince Charles’ comments were later twisted into something more nefarious by royal advisors and then shared with Harry and Meghan. “It was turned into something very toxic,” Andersen told Today. “It was weaponized really, by the men in gray who run the palace organization.”

However, while speaking to reporters over the weekend, a spokesperson for Prince Charles has dismissed the claim in Andersen’s book, according to Reuters, calling it “fiction and not worth further comment.”