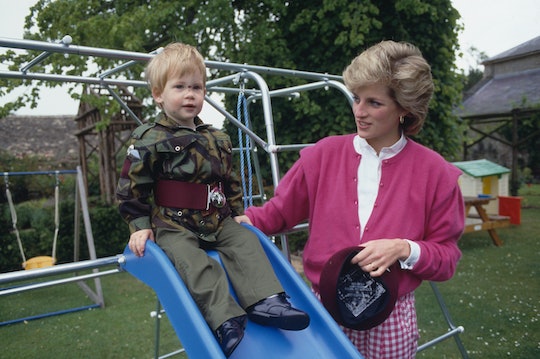 In the forward to Hospital by the Hill, Prince Harry reveals his mother’s death “left a huge hole inside of me.”

Prince Harry opened up about losing his mother at a young age in the foreword of a new British children’s book aimed at helping children mourn parents lost to COVID-19. In Hospital by the Hill, Prince Harry wrote about the impact of Diana’s death and his journey with grief, telling bereaved children that although losing his mother “left a huge hole inside” him, that hole was eventually filled with “love and support.”

“If you are reading this book, it’s because you’ve lost your parent or a loved one, and while I wish I was able to hug you right now, I hope this story is able to provide you comfort in knowing that you’re not alone,” Prince Harry, who lost his mother at the age of 12, wrote in the foreword of Hospital by the Hill, according to The Guardian.“When I was a young boy I lost my mum. At the time, I didn’t want to believe it or accept it, and it left a huge hole inside of me. I know how you feel, and I want to assure you that over time that hole will be filled with so much love and support.”

Written by Chris Connaughton, Hospital by the Hill tells the story of a child whose mother worked at a hospital during the pandemic and died of the virus. According to The Washington Post, the book will be made available to children who had a parent die of COVID-19 while working as a frontline essential worker. Copies of Hospital by the Hill can be obtained through the book’s official website.

In his message to bereaved children, Prince Harry said he did not believe that losing the physical presence of a parent meant also losing that parent’s love or memory. “We all cope with loss in a different way, but when a parent goes to heaven, I was told their spirit, their love and the memories of them do not,” Prince Harry wrote in his foreword, the Associate Press reported. “They are always with you, and you can hold on to them forever. I find this to be true.”

Princess Diana died at the age of 36 in August 1997 following a car accident in Paris’ Pont de l’Alma tunnel. Reports of the incident have said Princess Diana’s car was being chased by paparazzi at the time of the accident. At the time of her death, Prince William and Prince Harry were just 15 and 12 years old, respectively.

Although the two princes were initially shielded from much of the public news cycle regarding their mother’s death, both have since opened up about their grief as adults while advocating for mental health resources. In 2016, for example, Prince Harry told Good Morning America that years of staying silent about the loss of his mother had ultimately hurt him. “I really regret not ever talking about it. For the first 28 years of my life, I never talked about it,” he said. “It is okay to suffer, but as long as you talk about it. It is not a weakness. Weakness is having a problem, and not recognizing it, and not solving that problem.”

In his foreword for Hospital by the Hill, Prince Harry reassured children that, with time, they will begin to feel better. “You may feel alone, you may feel sad, you may feel angry, you may feel bad,” the Guardian reported he wrote. “This feeling will pass. And I will make a promise to you — you will feel better and stronger once you are ready to talk about how it makes you feel.”