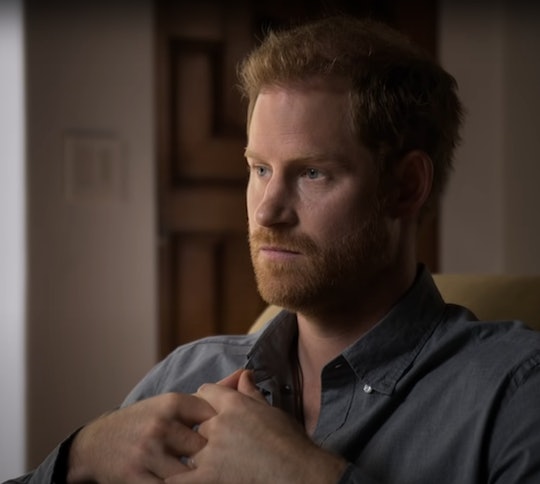 Prince Harry sat down with Oprah Winfrey to discuss his mental health issues and road to healing in the pair's new series The Me You Can't See.

As part of their new series, The Me You Can’t See, Prince Harry and Oprah Winfrey sat down to talk about the Duke of Sussex’s struggles with mental health, childhood trauma, and breaking the silence and “neglect” that pervaded his life within the royal family. Additionally, Harry opened up about his substance abuse and binge-drinking throughout his 20s and into his early 30s, describing a four-year period from 2012 to 2016 as a “nightmare time.”

The Me You Can’t See, a five-part series that premiered on Apple TV+ on May 21, shares the stories of celebrities — including Glenn Close, Lady Gaga, and DeMar DeRozan — and everyday people as they open up their struggles with mental health and overcoming adversity.

In a sit-down with Winfrey, Harry cited his mother Princess Diana’s death in 1997, and the subsequent repression of his sorrow and anger, as one of the primary sources of his trauma. He described feeling as though he was playing a part and “doing what was expected” in the aftermath of her death “showing one tenth of the emotion” of people who “never even met her” at her funeral.

Later, he said, the sorrow and the anger about the “lack of justice” over his mother’s death (he emphasized that the same paparazzi who chased Princess Diana’s car in Paris and caused it to crash “photographed her dying on the back seat”) was never properly addressed.

“I wasn’t in an environment where I was encouraged to talk about it, either,” he said. “That was sort of squashed.” Harry added that he was encouraged to “play the game,” and felt “bullied into silence” by the business-side of the monarchy nicknamed “the Firm,” an entity his wife Meghan, Duchess of Sussex, referenced in her interview with Winfrey earlier this year.

It’s a subject Harry recently explored in an appearance on Dax Shepard’s Armchair Expert podcast earlier this month. During the episode, Harry talked about his “wild” 20s, including a notorious trip to Las Vegas in 2012 where the then 27-year-old prince was photographed naked. “At least I wasn’t running down the strip, stripping or naked,” he joked. He also discussed the cycle of “genetic pain and suffering” that he wanted to change for his own children.

Harry began discussing his own mental health struggles in 2017, which was and remains uncommon within the British monarchy. The Me You Can’t See continues Harry’s commitment to breaking the silence and stigma surrounding the discussion of mental health, but is hardly his first official foray into the subject.

In 2016 he, his brother, Prince William, and sister-in-law, Kate Middleton, launched the Heads Together campaign with the Royal Foundation with the goal of encouraging Britons to acknowledge, and treat, mental illness. In 2020, he and Meghan launched their HeadFIT initiative to help soldiers and veterans with mental health services.

In The Me You Can’t See, Harry shared that he has been in therapy for approximately four years to which Winfrey, surprised, points out is relatively recent. “But four years of therapy for an individual who never thought that they would ever need or do therapy,” Harry replied. “That’s a long time!”