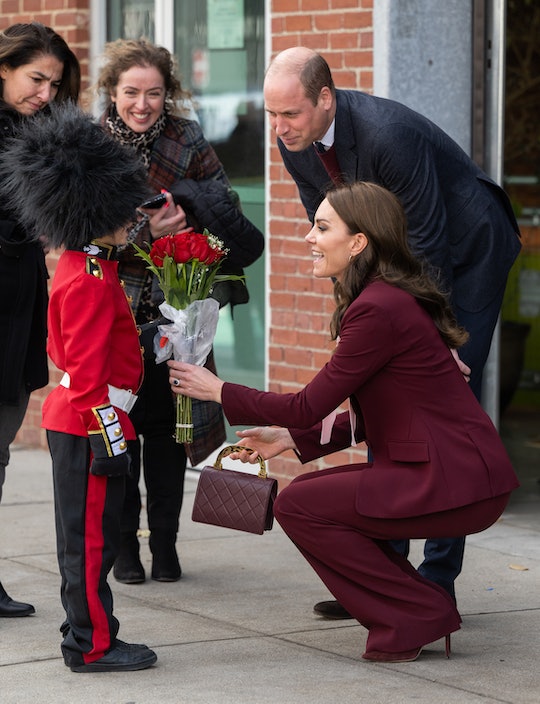 The kid got to meet royalty and has next’s year Halloween costume all set too!

Prince William and Kate Middleton are thrilling their American fans with their recent visit to the United States, hitting up the historic city of Boston. But there is perhaps no one more excited to meet the Prince and Princess of Wales than 8-year-old Henry Dynov-Teixeira. The tiny fan of the royals really made an impression on the couple as he showed up with his two moms to meet the royal couple dressed as the cutest little British guard. As if his amazing costume wasn’t enough, he even showed off his superb manners and brought along a bunch of red flowers (thereby discrediting the reputation Americans have for being ill-mannered)! Someone make this kid a knight or something.

All the adorableness went down outside of Greentown labs, a company that bills itself as the world’s largest climate-technology startup incubator. According to People, when little Henry had visited London this past summer with his mothers, he was absolutely spellbound by the Changing of the Guard at Buckingham palace. His awesome moms saw how much their son enjoyed the ceremony so they bought their stoked kid the outfit as a souvenir.

The King’s Guard (called the Queen’s Guard during the reign of Queen Elizabeth II or any other female monarch, for that matter) and their iconic uniforms have a fascinating history. Made up of five regiments — Grenadier Guards, The Irish Guards, The Scots Guards, The Welsh Guards, and the longest-serving Coldstream Guards — they have been guarding royal homes since the reign of King Charles II in 1649. (Given that his father, Charles I, was beheaded by Cromwell and his forces, this was no doubt a wise and practical decision.) But the iconic 18-inch hat did not become part of the ensemble until 1815. According to reporting from We Are The Mighty, these bearskin hats (and yes, they’re still made of bearskin) were first worn by members of Napoleon’s elite French Imperial Guard. When the tide of the Battle of Waterloo ultimately turned on the French, The Duke of Wellington’s forces took the caps as trophies and ultimately incorporated them into their own regalia.

We think Henry is doing the historically significant look justice. And just look at the way the royal couple is crouched down in perfect parental synchronicity.

The way the duo is looking at little Henry makes you think they’re probably missing their little ones across the pond and imagining how cute George, Charlotte, and Louis would look in their own bearskin hats.