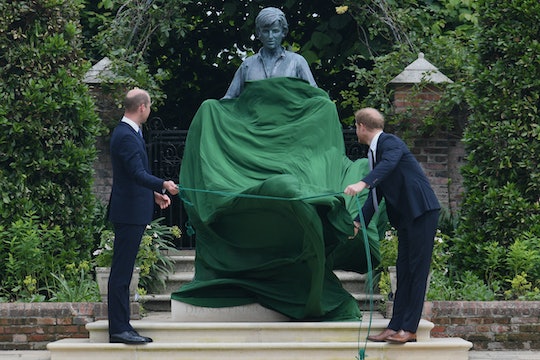 “Our hope is that this statue will be seen forever as a symbol of her life and her legacy,” the princes said.

In celebration of what would have been their late mother’s 60th birthday, Prince William and Prince Harry reunited to unveil a statue of Princess Diana in Kensington Palace’s newly redesigned Sunken Garden. In a rare joint statement released Thursday, the brothers said they hoped the statue, which was commissioned in 2017 on the 20-year anniversary of Princess Diana’s death, would serve as a permanent reminder of their mother’s legacy.

“Today, on what would have been our mother’s 60th birthday, we remember her love, strength, and character — qualities that made her a force for good around the world, changing countless lives for the better,” Prince William and Prince Harry said in a joint statement. “Every day, we wish she were still with us, and our hope is that this statue will be seen forever as a symbol of her life and her legacy.”

Sculpted by Ian Rank-Broadley, the statue features Diana, Princess of Wales, surrounded by three children. In a statement shared by CNN, Kensington Palace noted the children were meant to be symbols of the universality and generational impact of the humanitarian and charity work Princess Diana did throughout her life.

But they’re not the only symbolic aspect of the statue. “The portrait and style of dress was based on the final period of her life as she gained confidence in her role as an ambassador for humanitarian causes and aims to convey her character and compassion,” Vogue reported Kensington Palace said in reference to the simple, but elegant, button-up blouse and belted pencil skirt Princess Diana has been cast as wearing in the statue. Additionally, an excerpt from the poem “The Measure of a Man,” which was also used in the late princess’ 2007 memorial service, has been engraved near the front of the statue.

On Thursday, Prince William and Prince Harry expressed their gratitude to Rank-Broadley as well as Pip Morrison, who redesigned the Sunken Garden at Kensington Palace in honor of Princess Diana. The pair also thanked “all those around the world who keep our mother’s memory alive.”

When announcing their intent to commission the statue in 2017, Prince Willam and Prince Harry said they felt it was time to honor the impact Princess Diana had on the world. They expressed hope the statue would one day serve as a place where people could come to reflect on their mother’s legacy. "It has been twenty years since our mother's death and the time is right to recognize her positive impact in the UK and around the world with a permanent statue,” they said in a statement released by Kensington Palace. "Our mother touched so many lives. We hope the statue will help all those who visit Kensington Palace to reflect on her life and her legacy."

Visitors to the palace can now do exactly that with a visit to the Sunken Garden.